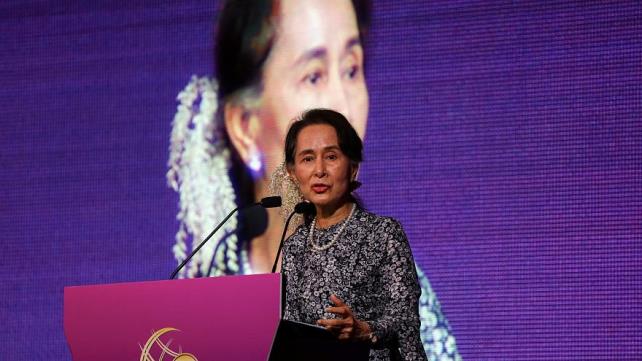 At least 10 people have been killed in Myanmar after fresh clashes between the security forces and demonstrators.

There are reports of further deaths in cities around the country but these have not been confirmed.

The security forces used live rounds on large crowds in Mandalay and Monywa, and at least two of the victims are believed be teenage children.

Mass protests have been taking place across Myanmar since the military seized control on 1 February.

The coup saw elected government leaders, including Aung San Suu Kyi, overthrown and detained. Protesters are calling for their release and an end to military rule.

But the military has provided no proof of these allegations – instead, it replaced the Election Commission and promised fresh polls in a year.

At least 28 people have been killed so far in more than a month of unrest.

Despite growing international condemnation, the military has escalated its response to the street protests and Wednesday saw violent clashes in a number of areas.

At least four people were shot dead during a protest in Monywa in central Myanmar. At least 30 others were wounded in the unrest, a local journalist told Reuters.

Further deaths were reported in Yangon, Mandalay and Myingyan. Some 19 people were injured following one protest on the outskirts of Yangon, AFP agency reported.

“They fired tear gas, rubber bullets, and live rounds,” a volunteer medic told the AFP news agency in Myingyan, adding that at least 10 people had been injured.

“They didn’t spray us with water cannon, [there was] no warning to disperse, they just fired their guns,” one protester in the city told Reuters.

The military has not commented on the reported deaths.

The latest round of violence follows a meeting between foreign ministers of neighbouring South East Asian nations. The group urged restraint, but only some of the ministers pressed the military junta to release Ms Suu Kyi.

Ms Suu Kyi, 75, was seen for the first time since her detention earlier this week when she appeared in court via video link. It followed the deadliest day of violence yet on Sunday when 18 people were killed.__BBC