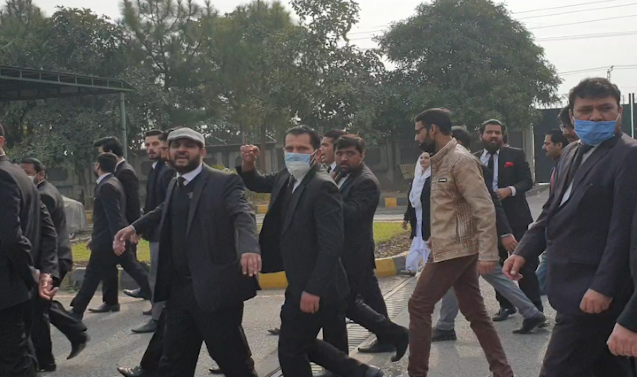 ISLAMABAD: The Islamabad High Court (IHC) on Tuesday ordered suspension of the licences of 21 lawyers for ransacking the chamber of Chief Justice Athar Minallah during a protest against the demolition of their alleged illegal chambers at the Islamabad District Courts last month.

A three-member bench presided by Chief Justice Athar Minallah heard the case. “We are of the opinion that the 21 respondents arrayed in the complaint in hand had committed grave acts of indiscipline and misconduct on the 8th of February, 2021,” an order of IHC issued today read.

The lawyers were also given an opportunity to satisfy the court as to why complaints may not be referred to the respective regulatory authorities including the Pakistan Bar Council and Islamabad Bar Council for taking disciplinary proceedings agianst them.

On February 8, lawyers barged into the senior-most judge’s chamber and chanted slogans against the judiciary and the CDA for the action against the demolition of their alleged illegal chambers at the Islamabad District Courts.

Justice Minallah was reportedly trapped inside his chamber following the incident. The protesters also forced the rest of the judges out of their courtrooms.

Justice Mohsin Akhtar Kayani asked the lawyers to resolve the matter through dialogue, but they refused, saying the issue must be resolved at once.

Talking to The Express Tribune, Additional Attorney General Tariq Mahmood Khokhar said that the storming of the Islamabad High Court by a mob of lawyers was an attack on the judiciary.

On February 9, a case was registered against 32 lawyers, including four women law practitioners.

The FIR registered at the Ramna police station included Section 7 of the Anti-Terrorism Act besides mob attack causing a threat to life, vandalism, disrupting peace and other relevant clauses of the Pakistan Penal Code.__Tribune.com