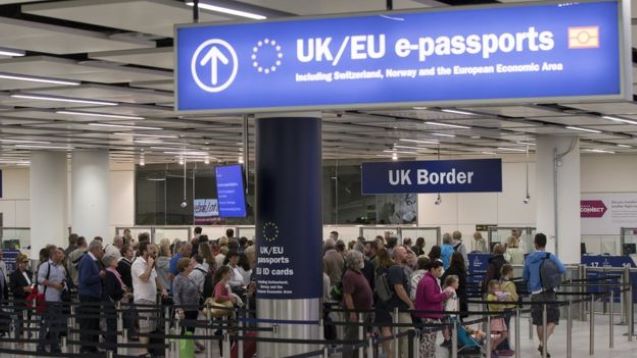 Passengers have complained of queues of up to seven hours long at Heathrow Airport’s border control.

One passenger described a mother having to feed her baby on the floor, saying conditions were “not humane”.

Heathrow Airport said the government needed to make sure there were enough staff to cope with demand.

Alicia, 26, who did not want her surname used, was flying back from Vienna after attending a medical appointment for her leg.

She told the BBC she began queuing to go through border control at 18:30 on Sunday evening, but did not get through until 01:30 on Monday.

“I felt really unsafe,” she said. “It was really disorganised. One mother had to feed her baby on the floor. It’s not humane.”

Alicia added: “The staff didn’t offer any chairs, there was no social distancing. Only about three or four people were checking documents.”

Several passengers told the BBC that they had spent five, six or seven hours waiting at the border on Sunday evening with only a few border force officials processing their paperwork.

Camilla Tetley, 26, was flying back from Dusseldorf having spent Christmas with her parents who live there. She said she joined the queue at passport control at 7pm and didn’t leave it until 1:30am.

“The queue never seemed to end. There was nowhere to sit, including for people with children or older people. I felt like we were just left stranded,’ Ms Tetley said.

“There was some water at two hour intervals. We asked people what was going on and how long it would be, but no one seemed to know. There were lots of empty booths at the front of the queue so it looked like the space wasn’t being used very well.

“We were quite crowded in as well. It seemed like it was quite mismanaged. The staff were not enforcing social distancing rules. Everyone had a mask on, but people were very close together.”

A worker in the immigration department at Heathrow, who asked not to be named, said the situation was chaotic. “It’s a mess. We cannot deploy without breaching health and safety measures. We are short staffed anyway. What are you meant to do?”

Lucy Moreton, general secretary of ISU, the union for Borders and Immigration, said the queues were caused by Covid restrictions imposed by Border Force, which is part of the Home Office.

She said that staff have been put into bubbles of 10 people to reduce the risk of cross infection, but that this prevents more staff being deployed when the border becomes busy.

“Staff are very upset about the measure,” said Ms Moreton. “They have been receiving verbal abuse as the queues have got longer.

“The measure is not necessary, it contributes to the queues and it doesn’t stop infection as staff have to interact outside those bubbles in other areas of the site,” she said.

The Home Office called these comments “disingenuous” and said that the ISU had previously acknowledged that zonal working provides benefits to health and safety.

The ISU disputes this, saying it had never said that the measure has any benefits.

It said the measure adds nothing material to Covid security for staff, but impairs their ability to respond to demand.

Staff at the border have also been told not to wear masks as they are processing passengers.

While this is in line with public health guidance as there is a screen, she said staff are concerned as interactions can be between 15 and 20 minutes and include passing materials between passenger and Border Force.

Border Force have failed to meet their targets for processing passengers over the pandemic.

A spokesman for the PCS Union, who have 13,000 members in the Home Office, said: “The union has voted for strike action over the fixed roster, which by creating a bubble of 10 is inflexible and is leading to unacceptably long queues at Heathrow.

“We support any attempt to reduce the risk of spreading Covid-19.

“However, the current approach is not the best mechanism for keeping staff safe,” he added.

Heathrow Airport said: “When additional measures were implemented at the border, we were clear with the government that they must support the Border Force to ensure appropriate numbers of officials are on duty to minimise queuing in the Immigration Hall.

“It is deeply regrettable that Border Force has been unable to provide adequate resourcing, despite our many attempts to highlight the implications of not doing so.

The airport added that it was Border Force’s and the government’s responsibility “to ensure that their processes are properly managed and efficiently carried out” without hitting passenger welfare.

A Home Office spokesperson said: “Unfortunately a large number of arrivals yesterday failed to purchase their mandatory testing packages for the second and eighth days of quarantine in the UK.

“This caused delays as they were made to purchase them after being checked by Border Force. We make absolutely no apologies for this. Every essential check stops the spread of coronavirus in the UK. These people should not have been allowed to travel without their testing packages and we are following up with regulators and carriers to ensure the law is enforced.”

Despite travel measures in place to try to mitigate the spread of coronavirus, new variants of the disease are being detected in the UK.

Officials are trying to find a person who tested positive for the Brazil variant of coronvavirus, which may be more contagious than “regular” Covid.

The person used a home-testing kit, but didn’t complete a registration form, prompting an appeal for anyone without a result from a test on 12 or 13 February to come forward.__BBC