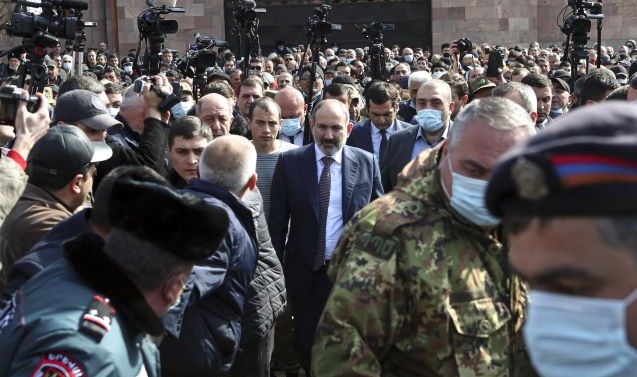 YEVREVAN: Prime Minister Nikol Pashinyan warned of an attempted military coup against him on Feb. 25, and thousands took to the streets of the capital to support him after the army demanded he and his government resign.

The demonstrations began immediately after Pashinyan signed a Nov. 10 peace deal that saw Azerbaijan reclaim control over large parts of Nagorno-Karabakh and surrounding areas that had been occupied by Armenian forces for more than a quarter-century.

Pashinyan, a former journalist who swept to power in a peaceful revolution in May 2018, has rejected calls to step down despite opposition protests. He says he takes responsibility for what happened but now needs to ensure his country’s security.

On Feb. 25, the army added its voice to those calling for him to resign.

“The ineffective management of the current authorities and the serious mistakes in foreign policy have put the country on the brink of collapse,” the army said in a statement.

It denounced Pashinyan’s sacking of the first deputy head of the army’s general staff, a move it described as irresponsible, groundless and detrimental to the state.

Two former presidents – Robert Kocharyan and Serzh Sarksyan – released statements calling on Armenians to throw their support behind the military.

It was unclear whether the army was willing to use force to back its statement, in which it called for Pashinyan to resign.

Pashinyan responded by calling on his followers to rally in the centre of the capital, Yerevan, to support him and took to Facebook to address the nation in a live stream.

“The most important problem now is to keep the power in the hands of the people, because I consider what is happening to be a military coup,” Pashinyan said.

He then appeared with his wife, son and daughter outside the main government building where several thousand of his supporters had gathered. He said it was vital to avoid confrontation despite the mounting tension.

“The danger of the coup is manageable,” he said. “We don’t have enemies inside Armenia. We have only brothers and sisters.”

Pashinyan on Feb. 25 called on the army to fulfill its duty and obey the people and elected officials, after the military called for him to resign.

“As an elected prime minister, I am ordering all generals, officers and soldiers: do your job of protecting the country’s borders and territorial integrity,” he said, during a rally with supporters.

He added that the army “must obey the people and elected authorities”.

Several thousand opposition supporters staged a rival protest on a different square in the capital. Crowds there could be seen cheering and clapping as a fighter jet flew overhead in footage circulated by Russia’s RIA news agency.

In Pashinyan’s earlier livestream, he said he had dismissed the head of the general staff of the armed forces, a move that still needs to be signed off by the president.

Pashinyan said a replacement would be announced later and that the crisis would be overcome constitutionally.

Arayik Harutyunyan, president of the Nagorno-Karabakh enclave, offered to act as a mediator between Pashinyan and the general staff.

“We have already shed enough blood. It’s time to overcome the crises and move on,” he said.

The Kremlin said on Feb. 25 it was concerned by growing political tensions in Armenia after the army demanded Pashinyan resign in a move Pashinyan said looked like an attempted coup.

Speaking to reporters on a conference call, Kremlin spokesman Dmitry Peskov called on both sides to resolve their differences peacefully and within the framework of the constitution.

Armenia, where Moscow has a military base, is a close Russian ally.__Hurriyet