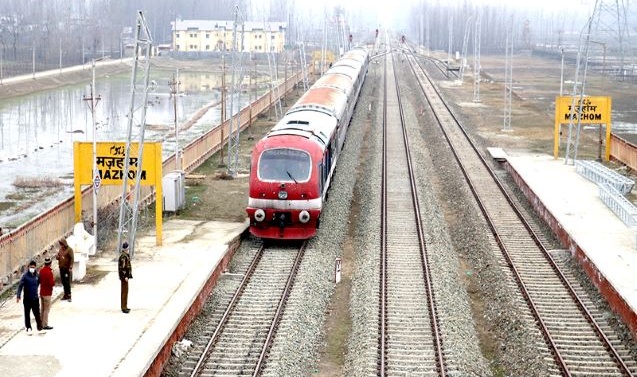 The partial resumption of train service on the 137-kilometre Baramulla-Banihal rail line on Monday cheered up the travellers. The service had been snapped about 11 months ago due to outbreak of covid19.

The 16 railways stations falling between Baramulla and Banihal, were once again abuzz with passengers even as the resumed train service witnessed only two runs: Baramulla to Banihal and vice-versa.

The passengers were spotted in good numbers at the Baramulla, Sopore and Pattan railway stations. “We were waiting eagerly for the resumption of the train service. The service will positively provide a huge relief to the daily commuters who otherwise were often facing hardships due to massive traffic jams on Srinagar-Baramulla highway,” said Ishfaq Rashid, a government employee, posted at Srinagar.

A family from Boniyar said they were extremely delighted over the resumption of the train service “as there are various issues in other mode of transportation like frequent traffic jam and cost factor”.

“We hope the authorities will increase train frequency so that common people don’t face any inconvenience,” said Mushtaq Ahmad of Manzgam Boniyar. However, some passengers expressed surprise over the fare hike.

“Travelling by a passenger vehicle such as Tata Sumo is quite time consuming due to traffic jams especially in Pattan and Sangrama. I am glad that train service has resumed although the fares have increased. I am looking forward that my journey between my office at Budgam to my residence in Sopore will be quite comfortable now,” said Muhammad Ashraf, who works at a private hospital at Ompora and is a frequent train passenger.

The first train departed from Baramulla at 9:10 am and the second train from Banihal at 11:25 am. “Both the trains operated as per schedule. We had carried out sanitisation of trains and railway stations for the last few days and are also ensuring that Covid-19 guidelines are followed during the travel,” Chief Area Manager, Northern Railways, Saqib Yousuf said.

He said that the officials at the public address systems at the railways stations have been asked to make frequent announcements creating awareness about following of Covid-19 guidelines such as mandatory wearing of the protective facemasks and social distancing during the travel.

“There are plans to increase the frequency of the train service but it depends on how the situation around Covid-19 remains during days to come,” he said, adding that there would be an evaluation of the rail service from time to time for this purpose.

The latest minimum fare on the train in Kashmir is Rs 30 and maximum fare is at Rs 65, officials said.

The train service in Kashmir had also remained suspended in 2019 for several months after the government of India scrapped special constitutional status of J&K. Frequent suspension of train service has caused railways losses in crores besides creating inconvenience to the passengers.__GK News