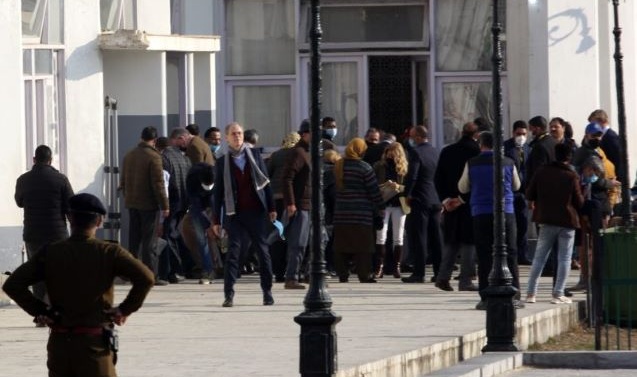 A delegation of envoys from 23 countries arrived in Srinagar on Wednesday beginning their two-day Jammu and Kashmir visit to assess the situation after the abrogation of the special Constitutional position of the region.

The envoys arrived at the Srinagar International Airport at around 10 am and later visited Magam in Budgam where they met various panchayat representatives. The envoys were later briefed on panchyati raj and grievance redressal through the “Back to Village” programme of the government.

Addressing media persons after meeting the delegation of envoys, DDC chairperson from Budgam, Nazir Ahmad Khan, said the visiting diplomats held threadbare discussions regarding panchayati raj. “Considering the fact that Budgam still needs a lot of development, we want to witness an overall development of the district. The visiting envoys enquired about various projects and presence of different industries which we apprised them with. We have also expressed the need to empower the DDC members and setting up a separate finance commission,” Khan said.

DDC chairperson from Baramulla, Safina Baigh, who was part of the group which met the visiting envoys said various issues were discussed during the meeting in which focus was on growth of tourism, horticulture and women’s empowerment in J&K.

Baigh said she asked the envoys that “J&K be kept as a priority region for various developmental interventions”.

“My first request would be to help us with technology transfer in agriculture and horticulture sectors. We have just started the adoption of high-density orchard programs but a lot more needs to be done across the fruit industry and value chain,” Baigh said. Baigh also highlighted how the EU can undertake “a grant-based entrepreneurship development program” in her constituency. She also said that travel advisories imposed by different countries on J&K be lifted which could provide a boost to tourism here.

The group of envoys also paid a visit to Hazratbal shrine and ended their day by holding interactive sessions with artists, writers, media persons and artisans.

On Thursday, the envoys will be leaving for Jammu where they will be meeting Lieutenant Governor Manoj Sinha, DDC members and members of the civil society.

This was the fourth visit of envoys to J&K in the last two years. In January 2020, a 15-member foreign envoys delegation arrived in Srinagar on a two-day visit to J&K and met over 100 people, including senior Valley-based politicians, newspaper editors and grassroots representatives. A month later, a group of 25 foreign envoys of over 20 countries visited Kashmir for a first-hand assessment of the ground situation. Earlier, in October 2019, about 23 Members of the European Parliament (MEPs) visited J&K on a private tour to assess the ground situation.

Meanwhile, parts of Srinagar and Magam witnessed a shutdown on Wednesday as trade and business establishments were closed. However, traffic plied normally on the roads.__Courtesy GK News