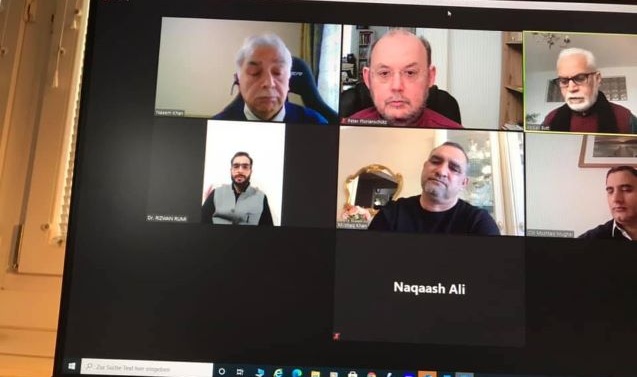 On 13th 0f February 2021, Kashmir Culture Centre Vienna held an online web talk on Line of control Peace mission. LINE OF CONTROL PEACE MISSION, is a non- political entity consisting of vibrant, selfless members of Jammu and Kashmir living across the world, endeavours how not to metamorphose the paradise JK into an ideological battlefield, with shellings and blitzing sucking the very life out of peace loving people, who are equally entitled to living with dignity and security. The foundation of LOC peace mission was laid on 31st on January 2021.
The Participants of this event were:

Programme was moderated by Abbas Butt and he highlighted history of the division of the Indian-Subcontinent; the creation of Pakistan and the 562 princely states. He emphasized and elaborate, particularly the state of Jammu and Kashmir, ceasefire line, LoC and LAC in the light of UN and UNCIP resolutions briefly. Abbas Butt resembled the birth of LoC and division of jammu and Kashmir as a Human Right violation; as it divided not only state but also the communities and families.

Guest speaker Dr. Rizwan Rumi expressed his gratitude to participate the event and he explained the geography and geographical aspect of the L.o.C and LAC. He supposed that the borders between India, China and Pakistan in jammu Kashmir territory are the most complex and dangerous area of the World. He claims in this geographical scenario the people living across the LoC are powerless and they are extremely vulnerable to physical and psychological injuries. The people living on and across LoC find themselves in trouble during minor skirmishes and mines are also increasing their miseries. He expresses his opinion that such actions forced people to displace and leave their ancestral land and their right of education and work is also compromised by either side. He also explained that due to the division of the State and LoC, there are many families who are divided and cannot visit their loved ones by a simple and straight way. Instead they must have to adopt a long route via Islamabad and New Delhi, if one dares to visit them. He also expressed the aim and objects for the creation of LoC Peace Mission. He expressess the desire to solve the Kashmir issue once for all and demanded that both the governments Should provide the Telephone and Internet facilities on and across the LoC for the divided families. He also demands to open different routes along the LoC to meet the members of the divided families and different communities.

Dr Ishaq read a written statement. He stressed the peace and a peaceful atmosphere at and across LoC and he draw an imagine how the people are living on and along LoC. He also elaborates the aim and objects of LoC Peace Mission. He insisted to start a peaceful dialogue to resolve this issue by the collective wisdom of the different sections of the society in the state of J&K. He also exposes the future plan of the LOC Peace Mission by their respective branches in Indian and Pakistani administrated jammu and Kashmir.

Third speaker was Cuncilor Mushtaq Mughal. He belongs to the Neelum Valley; a widely affected area on LoC by ceasefire violation. He is the member of city council of London and belongs to the Conservative Party. He expressed the views that now Kashmir issue is not only an issue between India and Pakistan, but China and USA has also involved in this issue. The recent statements of the US President hint that they have also deep interest in this region and in South Asia. He also highlighted the skirmishes between China and India on LAC in Ladakh. He also indicated that the construction of CPEC towards Gawader Port would also add the problems to the people of Jammu and Kashmir due to the conflict of interest between China, India and USA. He points out that USA has nominated India as their allies and big partner in South Asia and the USA policy shift in Afghanistan to have their permanent base there to watch China, Russia and Pakistan. He also repeated the rhetoric of Indian and Pakistani leadership for the use of nuclear weapons on the issue of Kashmir. He said that more than 1.6 billion people are hostage of this issue and a nuclear war is also not unavoidable if the matter does not resolve peacefully. He accused the Indian army for unprovoked ceasefire violation in the Neelum Valley. Then he told about the miseries of his family who where affected by Indian shelling. He blames the media of both countries that they never highlighted these miseries of the people living across LOC. He also highlighted the issue of divided Families and emphasized to build up a mecha¬nism for the meeting of divided Families inside Kashmir territory. In General he was more critical to Indian government than Pakistan. He also indicates the UNCIP resolution with all three options. He also criticized the govt of AJK for not helping the affected people financially.

Naeem Khan questioned why the Indian army violates ceasefire agreement?
The Indian army says the fire to prevent the infiltration and to stop Militant. Dr. Rumi said that is just Indian claim and Mushtaq Mughal said Kashmiris have right to go to this or other side without a visa.

Peter Florianschütz expressed his interest in the topic as a whole and expressed his readiness to intervene if the parties are willing to play him and his party a role for peaceful dialogue. In general he said that “his party believes on religious coexistence and harmony and denounce extremism and religious fundamentalism. They encourage peace and coexistence irrespective of cast, creed, religion and language. The party respect and support the democracy and democratic values and denounce Human Right violation by individual groups and by state institutions. We are ready to assist if desired or invited to mediate or to facilitate a peaceful dialogue process to avoid further suffering of human living across LOC and the Working Boundary. He said that he will discuss this issue with his party colleague in Vienna and in EU parliamentary committee.

Naeem Khan indicates that in the original ceasefire agreement both India and Pakistan agrees to deploy their troops 500 yards away from the ceasefire line. They should practice at least that. There are also UNMOGIP troops but Indian government is of the view that after Simla Agreement, the international troops have no mandate to remain there. The best thing would be if there are UN peacekeeping Blue Helmut troops.

He said “India links the formalization of the ceasefire or any sort of normalization with Pakistan to ‘Terrorism’. He further said that “India and Pakistan have no other option but to negotiate their disputes sooner or later. He said According to international standard regarding ceasefires, the most effective tolls to maintain peace are extended demilitarization zones along the frontiers, the presence of neutral observers and joint commissions for dispute resolutions.

He also comprises the LoC and LAC and said why not both countries make a similar agreement like on LAC. He proposed the deployment of UN peacekeeping force on LOC in an estimated 5 kilometer area between both armies.