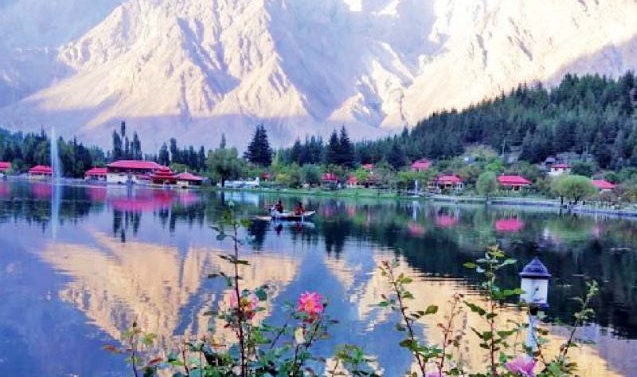 GILGIT: A rapid growth in the number of tourists in Gilgit-Baltistan has sparked concern about the conservation of natural resources and the environment.

The government of Gilgit-Baltistan has kicked off preparations to regulate tourism and turn it sustainable in an effort to support local communities which rely on tourists for earnings.

The Gilgit-Baltistan Tourism Department has launched initial plans that will be followed by the registration of tour operators and guides in order to facilitate tourists that will be visiting the region over the next one year.

The department intends to promote high-end tourism in places that attract a large number of visitors. At the same time, it is also making efforts to divert attention of visitors to places other than Gilgit, Skardu and Hunza to conserve the environment and natural resources.

Gilgit-Baltistan Tourism Department Director Saifullah told Daily Express that the region had emerged as a lucrative tourist destination. “In some districts, the number of visitors is increasing at a rapid pace,” he said.

Citing figures, he said that the region attracted 23,000 visitors in 2005-06 and the number soared past one million last year.

Similarly, the number of hotels has skyrocketed from 200 in 2005-06 to 4,000 at present. The significant rise in tourist arrivals has also led to problems such as irregular construction of hotels and deterioration of the ecology and environment.

The official said that the Gilgit-Baltistan Tourism Department had drafted a comprehensive strategy to achieve those goals and a feasibility report was being prepared to highlight the actual tourism potential of the region.

The report will identify 25 attractive places in addition to the major tourist attractions in the region.

“The purpose of the feasibility study is to promote high-end tourism in Gilgit-Baltistan,” he said. “Large-scale mass tourism has been on the rise for the past few years but it is not suitable for the local population because a majority of the tourists bring their own tents and food items, therefore, they do not contribute to the local economy at all.”

In addition, they drop litter at scenic sites, damaging the ecology and environment, he added.

The department intends to regulate camping sites to limit the impact of mass tourism on the ecology and environment. On the other hand, it will prioritise tour operators who can promote high-end tourism which will help boost the local economy.

“Due to the rapid growth of tourism in Gilgit-Baltistan, the construction of hotels has also accelerated, but many construction laws are being violated,” he lamented. “Hotels are being built overnight these days.”

The official pointed out that the region was located in an earthquake-prone zone, therefore it was important to consider the risk of natural disasters before starting construction work on any property.

Hospitality industry investors were constructing resorts and hotels on risky patches as well, he added.

He underlined that the tourism department had now planned to prevent the illegal construction of hotels as well as buildings without prior seismic study.

“In addition, the investors intending to construct hotels in Gilgit-Baltistan will have to receive approval from the tourism department and get restaurants and camping sites registered for providing facilities to tourists,” he explained.

Following the spike in the influx of tourists, unregistered tour operators have also become active across the country. Such agencies form tourist groups by advertising on social media and operate in an unprofessional manner.

“Tourists who hire such operators face difficulties in reaching Gilgit-Baltistan,” he said. The inexperienced and untrained tour guides add to the visitors’ woes.

“The Gilgit-Baltistan Tourism Department has decided, in principle, to make the registration of tour operators and tour guides mandatory and in this regard, an effective mechanism will be established,” he said.

Owing to the enhanced tourist activity, problems such as shortage of drinking water and foodstuff as well as traffic congestion have also been witnessed in Gilgit city.__Tribune.com