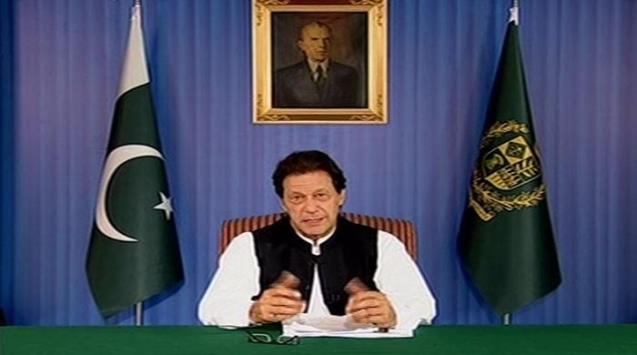 Prime Minister Imran Khan on Friday said Pakistan will allow Kashmiris to decide between choosing to join Pakistan or remaining independent even after they vote in favour of Pakistan in a future plebiscite.

Addressing a public gathering in Kotli district of Azad Jammu and Kashmir (AJK) on Kash­mir Solidarity Day, which is being observed across the country today, the premier also reminded the United Nations and the international community that they had failed to provide the promised right to the people of Kashmir to determine their own future.

He recalled that the world had promised Kashmiris in 1948 that they would get the right to decide their own future as per UN Security Council resolutions.

“So I’ve come here to firstly remind the world that the right [promised] to the people of Kashmir was not fulfilled,” he told the crowd.

In contrast, the prime minister noted, East Timor, which was an Indonesian island with a Christian majority, became independent after the UNSC pursued a referendum there.

The premier said he had in the past reminded and will always remind the UN that “you did not fulfil the promise [made to Kashmiris].”

Imran said the entire Pakistan was standing with the people of occupied Kashmir. “And not just all of Pakistan, but the Muslim world is standing with you,” he told them.

“If Muslim governments, for any reason, are not supporting you today, I can assure you the entire population of the Muslim world is standing with the people of occupied Kashmir,” he said, adding that even non-Muslims who favoured justice believed that Kashmiris should be given their promised right.

Prime Minister Imran said the people of Pakistan understood the ordeals the residents of occupied Kashmir had gone through and continued to suffer.

“I as a father want to say to you that we all know what you go through, the kind of pain you face, the kind of tyrant you are confronting,” he told Kashmiri parents.

“Whatever strength I have, I will raise your voice at every forum. I have been doing it and will keep raising it. […] Rest assured that I will be the ambassador of Kashmir and will raise my voice for you everywhere until Kashmir gains independence.”

The prime minister said upon assuming office he had tried his best to send a message of friendship to India and make it understand that the Kashmir issue could not be resolved through “oppression”.

“World history shows that no powerful army of the world can win against a [united] population; when an entire nation stands up, the biggest armies failed,” he said, citing the examples of Vietnam, Afghanistan and Algeria.

“India may bring 900,000 army [troops] or even more, but the people of Kashmir will never accept your slavery,” he added.

Referring to India’s revocation of occupied Kashmir’s semi-autonomous status, he said the “few people” in Kashmir who supported India now favoured independence too due to the oppression and injustice it began perpetrating after August 5, 2019.

“Any politician in Kashmir who is pro-India cannot win an election in Kashmir,” the premier emphasised.

‘Ready for talks with India for Kashmir’

Prime Minister Imran said he couldn’t initially understand why Indian Prime Minister Narendra Modi did not move forward on his offer for dialogue. But he said following the Pulwama attack, and after Indian jets violated Pakistani airspace and “martyred our trees in Balakot”, he understood that “they don’t want peace or friendship, but they were using Pulwama and Balakot to win elections.”

Moreover, firebrand Indian television anchor Arnab Goswami’s transcripts showed that the attack was pre-planned in order to win elections, Imran said, adding that the EU DisinfoLab report had further revealed that India was using hundreds of fake sites and accounts to spread propaganda against Pakistan.

“So we were doing friendship and you were cutting our roots but today what is coming in front of everyone? The agenda of RSS and their ideology,” he said, addressing the Indian leadership.

The premier said the RSS ideology had hurt India itself the most and it was the reason the country was so divided.

“Today India’s farmers are out protesting [and] the conditions of Muslims are in front of everyone,” he added, citing the citizenship law introduced by India deemed discriminatory towards Muslims.

“So Modi, my biggest message for you is that the divisions you’re doing in India, this Hindutva ideology may win you elections but you are laying the foundation for India’s destruction,” the prime minister told his Indian counterpart.

“Today I again say, solve the Kashmir issue together with us and for that, firstly the step you took on August 5 to revoke Article 370, you should restore it, and then talk to us, and give Kashmiris the right which the world community promised them according to UN resolutions.

“We are ready to talk with you again but […] never take this to understand that we want to have friendly ties with you in a state of weakness.”

On the occasion, the prime minister told people living near the Line of Control who face bombardment by Indian troops that the government will “fully help you”. He said the government had prepared a package for such populations, including people who had to relocate due to frequent firing.

Addressing the opposition Pakistan Democratic Movement (PDM) leaders holding a simultaneous rally in AJK, Imran said: “All those gathered in Muzaffarabad today, listen, if you want to do a long march then definitely do it, I will help you in doing it wherever you want to do it. But even if you hang upside down I will not give you NRO.”__Dawn.com