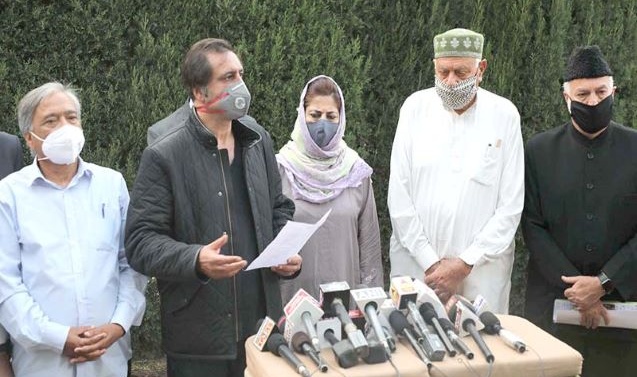 Within four months of forging an alliance to strengthen its fight for restoration of the special status of Jammu and Kashmir, the People’s Alliance for Gupkar Declaration (PAGD) on Tuesday saw one of its constituents – People’s Conference – withdrawing from the amalgamation of the six political parties.

The PC became the second party after the Congress to pull out of the PAGD, with now only National Conference and People’s Democratic Party left in the group as major alliance partners.

In a letter addressed to PAGD president and NC patron Dr Farooq Abdullah, PC chairman Sajad Gani Lone, who also held the position of PAGD spokesperson, said that “there has been a breach of trust between the alliance partners which is beyond remedy.”

“It is difficult for us to stay on and pretend as if nothing has happened. There has been a breach of trust between partners which we believe is beyond remedy. The majoritarian view in our party is that we should pull out of the alliance in an amicable manner rather than waiting for things to get messier. And I am confirming that we will no longer be a part of the PAGD alliance,” reads the letter.

The People’s Conference decision of leaving the PAGD comes a day after its top leadership held an important meeting in Srinagar during which the political scenario after the recently held District Development Council (DDC) polls was discussed.

“I am writing to you in reference to the recently held DDC elections and a spate of statements issued by leaders belonging to our party. The recurring theme of the statements was the fielding of proxy candidates by constituent parties against the officially mandated candidates of the PAGD,” reads the letter.

The PC chairman’s letter has asserted that “PAGD sentiment at top was not emulated on the ground.”

“We convened a meeting of our leaders yesterday and deliberated on the issue in detail. The predominant feeling in the meeting was that the PAGD sentiment at top was not emulated on the ground. It was felt that the results of a sincere alliance should have meant that “the whole is greater than the sum of its parts.”

“Instead, the whole was not greater than the sum of parts, sadly not even equal to the sum of parts, but much lesser and equal to just one part of the many parts. The sad reality that emerges is that in majority of the places the party fielding the candidate on behalf of PAGD was left to fend for itself and secured the votes that this party managed. In most places other parties were silent bystanders or worst compounded the problem by fielding proxy candidates,” the letter reads.

In the letter, Lone elaborated on the “damage done by the proxy candidates fielded by PAGD constituent parties to the official PAGD candidates”.

“DDC elections per se may not matter institutionally. But these elections were distinctive by virtue of the timing. Firstly, the context of these DDC elections was politically very important. It was the first election post August 5. And secondly it was a combined show of strength of a majority of the J & K political mainstream. It was less of an election and more of an opportunity to send a strong unanimous political message,” the letter reads. “On the face of it, PAGD won these elections unambiguously having won the maximum number of seats. We can’t hide statistics and apart from the number of seats that PAGD won, another important statistical variable in the context of August 5 is the number of votes polled against the PAGD. We believe that the votes polled against the PAGD are majorly the votes cast by proxies of PAGD constituent parties against official PAGD candidates. And the net outcome of selectively voting for and against PAGD is a very poor vote share. This is certainly not the vote share that people of J and K deserved post August 5,” reads the letter.

Lone also said that when his party couldn’t trust PAGD for something “as basic as DDC seats”, how could it trust the alliance for “larger issues”, Lone added.

“Out here in Srinagar where we hold our apex body meetings, we look at the statistics but out there on the ground people look at our actions and our intentions. They are eye witnesses to our actions. They are the actors in the political theatre scripted by us. And we think that people don’t know what we were up to. People know that blinded by political greed we fielded candidates against each other and the question they are asking, “if we can’t trust the PAGD leadership on something as basic as a DDC seat how can we trust them for larger issues.” We might have inflicted irreversible damage on to ourselves and on to the very people that we are supposed to represent. Trust between allying partners who have been rivals all along can be very elusive and extremely fragile proxies have made it perpetually elusive,” the letter reads.

Lone asserted that PC is “divorcing from the alliance not its objectives” and will continue to “adhere to the objectives that we set out when this alliance was made.”

“This alliance needed sacrifice. Every party had to sacrifice on the ground in terms of giving space to fellow allies. No party is willing to cede space, no party is willing to sacrifice. We fought against each other in Kashmir province not against the perpetrators of August 5. And those who perpetrated August 5 and their minions are now vocally gleeful,” Lone said in the letter. “I would however want to add that we are divorcing from the alliance not its objectives. We will continue to adhere to the objectives that we set out when this alliance was made. And the PAGD leadership should be assured that we will extend support on all issues which fall within the ambit of stated objectives. We have issued clear instructions to all party leaders not to issue any statements against PAGD alliance or its leaders,” the letter reads.__GK News