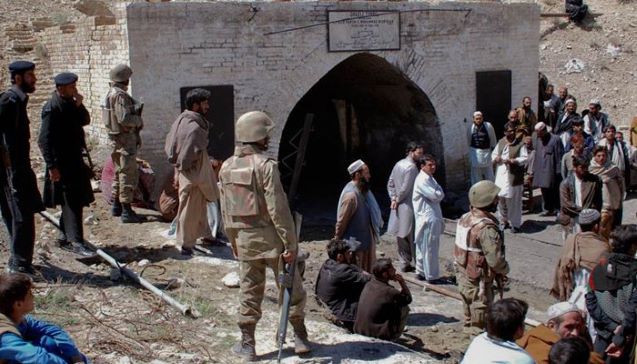 MACHH: Eleven coal miners were shot dead and four others were seriously wounded as unidentified persons attacked them at Machh, according to Geo News.

Police said that armed men took the coal miners to nearby mountains where they opened fire on them. Eleven were confirmed dead by police and the others injured were said to be in critical condition.

The injured were taken to the Machh hospital for treatment. After news of the incident broke, police and FC personnel have arrived at the coal mine.

Prime Minister Imran Khan took note of the incident, referring to it as a “cowardly inhumane act of terrorism”. In a tweet, the prime minister called on the FC to use all resources at their disposal to find out who committed the terrorist act and bring them to book.

“The condemnable killing of 11 innocent coal miners in Machh Balochistan is yet another cowardly inhumane act of terrorism. Have asked the FC to use all resources to apprehend these killers & bring them to justice. The families of the victims will not be left abandoned by the govt,” he tweeted.

Speaking to Geo News, Balochistan government spokesperson Liaquat Shahwani said that the incident was an act of terrorism. “Investigative institutions are probing the incident from every angle to determine who is responsible for this,” he said.

Shahwani said that terrorist activities in Balochistan were on the rise, adding that Levies personnel are present in the area to provide security. “The situation [in the area] was satisfactory hence this incident wasn’t expected,” he said, adding that the area where the killings took place is quite large.

The Balochistan government official said that security in the area will be increased after assessing the situation. He vowed that those responsible for the incident will be brought to the book. __The News