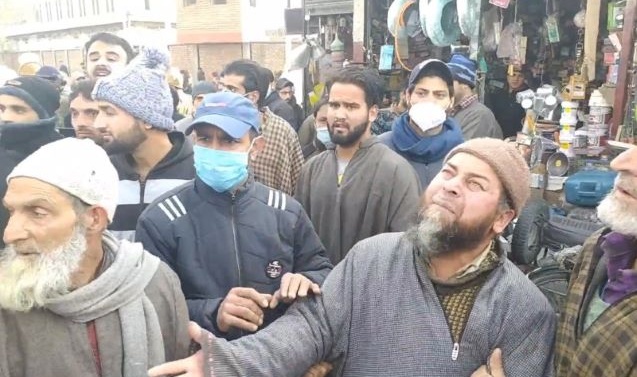 The families of three ‘militants’ who were killed in a gunfight with the security forces in Hokersar area on the outskirts of Srinagar staged a protest on Wednesday, claiming that their kin had no link with the militancy.

The police and the army have claimed that the trio were militants who refused to surrender during a gunfight that raged since last evening in Hokersar area.

“Yesterday at 10 a.m., he had tea with me and I swear about it. I don’t know where he was brought down from Sumo [cab]. Is this what is going to happen in Kashmir. Is this democracy? Is this the governor Raj? Kill me. Why you killed him? He was a student,” said Bashir Ahmad Ganie, grandfather of Aijaz Maqbool, one of the slain, as per news agency GNS. Aijaz was a resident of Putrigam village of Pulwama.

“Why was he killed? Was he a terrorist?” he told reporters outside Police Control Room (PCR) Srinagar, adding, “(Aijaz) is the son of a policeman Mohammad Maqbool Ganie who is posted in Ganderbal. Tell us why was our son killed. If they don’t, let them send task (SOG) force and kill us all at home,” the elderly man said, as per GNS.

The families of other two slain youth — Ather Mushtaq Wani (a student of 11th class as per their family), son of Mushtaq Ahmad Wani from Bellow Pulwama and Zubair Ahmad Lone (carpenter) from Turkewagan Shopian, also claimed that they were innocent.

Police could not be immediately contacted for the comment, even as on Twitter a police spokesman said that three militants were killed in the gunfight. Also, the names mentioned by the families have not been officially confirmed by the police so far.

Meanwhile, General officer Commanding (GoC) Kilo Force H S Sahi has said that the trio were planning a big strike on the highway to ‘gain publicity’.

Addressing a joint press conference at 2 RR headquarters at Zainakote, HMT, Srinagar, GoC Kilo Force said that in the past one week, five militants including a Pakistani national were killed in two separate gunfights in north Kashmir.

“Since past many days, intelligence inputs were pouring in continuously about the movement of militants on the Srinagar-Baramulla highway. Yesterday, we developed leads and came to know that militants are hiding in a house right opposite to Noora hospital at Lawaypora in HMT area,” Sahi said, as per news agency—Kashmir News Observer (KNO)

He said that when the presence of militants got established, army’s 2 RR, Police and the CRPF repeated asked them to surrender. “The militants fired indiscriminately at security forces and lobbed grenades as well. The operation was put on a halt due to dark but cordon layers were tightened. With the first light the firefight again resumed and militant used heavy ammunition against security forces,” the GoC said, adding that in the ensuing gunfight three militants were killed.

He, however, said that the identity and affiliation of the slain trio is yet to be known as police is trying to find out to which outfit they belonged to.__GK News