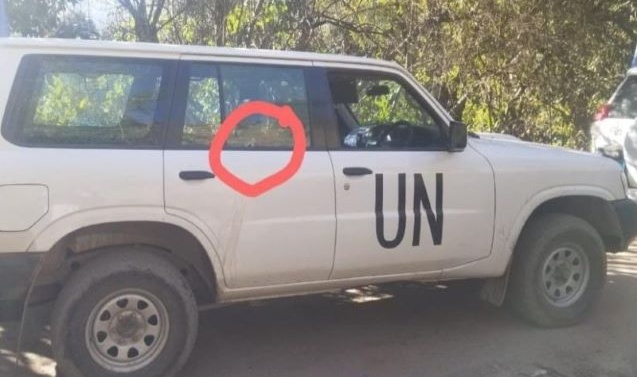 The United Nations on Friday confirmed that a vehicle of the UN Military Observer Group in India and Pakistan (UNMOGIP) was damaged after it was hit by an “unidentified object” near Rawalakot on the Pakistani side of the Line of Control (LoC).

“The Mission is currently investigating the incident,” deputy spokesman to the secretary general, Farhan Haq, said in response to a question from APP at the regular briefing in New York. He said according to details present with him, no one was injured in the incident but the UNMOGIP vehicle sustained damage.

Responding to an Indian journalist’s question on whether the UN was aware of the Indian government’s rejection of reports from Pakistan, Haq said, “We are aware of what both sides have been saying.”

“At this stage, we’re simply aware that a vehicle was hit by an unidentified object, like I said no one was harmed […] and we are investigating the incident.”

He said the incident occurred when UNMOGIP military observers were conducting routine monitoring activities near Rawalakot as part of the Mission’s mandate to observe and report on ceasefire violations at the LoC in Jammu and Kashmir.

Meanwhile, the Foreign Office (FO) on Saturday summoned the Indian Chargé d’Affaires over the “deliberate targeting” of the UN vehicle by Indian occupation forces.

“The Indian Chargé d’Affaires was summoned to the Foreign Office to register Pakistan’s strong protest at the deliberate targeting of observers belonging to the UNMOGIP,” a statement by FO spokesman Zahid Hafeez Chaudri said.

“The deliberate targeting of a UN vehicle, engaged in discharging the mandate of the UN Security Council, constitutes a grave violation of India’s obligations, under the council’s resolutions and the UN charter, which includes the obligation to ensure the safety and security of the UNMOGIP observers,” the FO statement said, adding that the stunt “appears to be a new coercive and reckless Indian ploy to hinder the observers’ work”.

“It was communicated to the Indian side that the brazen act was a flagrant violation of established international norms and represented a complete disregard for principles enshrined in the UN charter.”

It was also conveyed that the reprehensible act also represented a new low in the conduct of Indian occupation forces which target not only innocent civilians residing along the LoC but UN observers as well, the statement said.

The Indian side was called upon to desist from such blatant violations of international law, respect the 2003 ceasefire understanding between India and Pakistan, and let the UNMOGIP perform its role mandated by the UN Security Council, it concluded.__Dawn.com