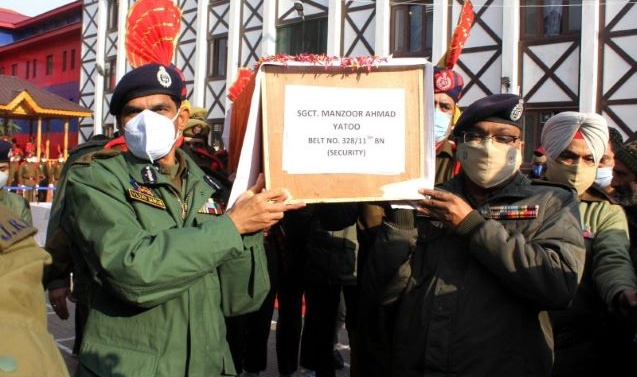 Jammu and Kashmir police chief Dilbag Singh on Monday said that the killing of a Personal Security Officer (PSO) of a PDP leader was an attempt to disrupt the ongoing election process.

“The motive was to disrupt the ongoing election process and the peaceful environment prevailing in the valley,” said Singh while talking to reporters on the sidelines of the wreath laying ceremony of PSO Manzoor Ahmed at District Police Lines (DPL) Srinagar.

He said that police have clues about the number of militants involved in the attack and area where they came from. “We will track them soon,” he said.

The DGP said that one must understand that J&K is going through an important exercise at present.

“There have been elaborate security arrangements but we can’t put the movement of people to a complete halt while ensuring the grassroot level exercise. In between, there is a hidden movement of an odd number of anti-national elements as well,” he said as per news agency KNO.

Commenting on the Sunday’s Poonch attack, DGP said that a group of Lashkar-e-Taiba militants had infiltrated and were trying to reach Shopian but couldn’t due to snow accumulation in the area.

“Their motive too was to disrupt the ongoing election process. We offered them surrender multiple times with an aim that we could show the world that how our neighbor is fomenting trouble in Kashmir. But the militants refused to surrender and were killed in the encounter,” he said, adding that “we have enough evidence and incriminating material recovered from the slain militants by which we can prove what their motive was.”

About PDP chief Mehbooba Mufti’s tweet wherein she has alleged that J&K administration has left the opposition leaders in a vulnerable position by downgrading their security, the DGP termed the allegations as baseless.

“The PDP leader (Haji Pervez Ahmed) at whose residence PSP Manzoor was killed, was asked by the police to shift the location on the grounds that his residence was in a congested area and prone to militant attacks. He never paid heed to our suggestions,” the DGP said.

“He regularly violated security advisories. We reviewed his security and found there was a need for one PSO for him, but two were provided to him,” he said, adding attacks like the one that happened today can happen despite the security cover to the politicians.

The PSO Manzoor who was guarding PDP senior leader Haji Pervez Ahmed at Natipora, Srinagar sustained bullet wounds after militants fired at him at Pervez’s residence early this morning. He was shifted to Bone and Joints Hospital, where he succumbed.__GK News