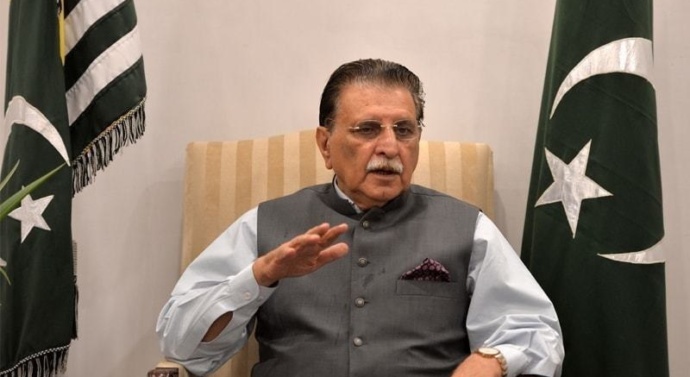 Azad Jammu and Kashmir (AJK) Prime Minister Raja Farooq Haider on Wednesday announced the launching of a campaign to “Save Kashmir” amidst what he termed “attempts to divide the state of Jammu and Kashmir”.
“This the most difficult time for the state of Jammu and Kashmir because it is being [permanently] divided. But as long as Azad Jammu and Kashmir remains in existence, no power can sweep the Kashmir issue under the rug,” he said at a function in the town of Pallandari, according to a press release issued by his office.
The function was held to mark the death anniversary of “Baba-e-Poonch” Col Khan Muhammad Khan, the grandfather of health minister Dr Najeeb Naqi Khan, who was also among the speakers.
Declaring that the state of Jammu and Kashmir was an indivisible entity, Haider said: “We may not be alive tomorrow but our next generation will definitely see the Kashmir issue reaching its logical conclusion. The decision [about the fate] of the disputed state will be taken by the people who are its policymakers.”
“It’s incumbent upon us to ensure that our names are not taken with Mir Jafar and Mir Sadiq and Allah willing it will not happen,” he said, referring to the two top officials of British India’s princely states whose names have become synonymous with betrayal.
“Today I once again declare that in order to save the [status of the] liberated territory I am ready to walk behind all other political leaders,” Haider said.
“We cannot cling on to power ingloriously while compromising our rights and freedom. We will not shirk from any sacrifice for the identity of Azad Jammu and Kashmir, success of Kashmir freedom movement and integrity of the entire state,” he emphasised.
While terming the 13th amendment in the AJK Constitution a landmark achievement of his government, he said AJK would not surrender, at any cost, the fiscal and administrative powers it had gained.
He expressed his gratitude to former prime ministers Nawaz Sharif and Shahid Khaqan Abbasi for “empowering and resolving some longstanding issues of the AJK government”.
He alleged that the present government had imposed a Rs15 billion cut in AJK’s share from the variable grant, which had created fiscal problems for the latter.
Haider demanded that the upcoming elections in Gilgit-Baltistan should be free and fair, promising that AJK’s polls scheduled for next year would also be free and fair.
“If any rigging is committed in the 12 constituencies [of AJK assembly] in Pakistan, its consequences willl be bad for all of us,” he cautioned.
The AJK premier also pointed out that the UN Security Council had made it clear that local assemblies in any part of Jammu and Kashmir “had no right to annex the territory concerned with any state (India or Pakistan).
He said it was also because of this reason that when the “puppet assembly” of Indian-occupied Kashmir had approved a resolution for accession with India, Pakistan had moved the Security Council against the move.
Haider said he had full faith in his party and legislators that they would not strike any deal at the cost of their people’s honour and integrity.
He also paid tribute to the people living along the Line of Control for braving Indian aggression and called upon Islamabad to raise the issue of unrelenting Indian shelling on educational and health institutions, markets, public transport and ambulances in the UN Security Council.