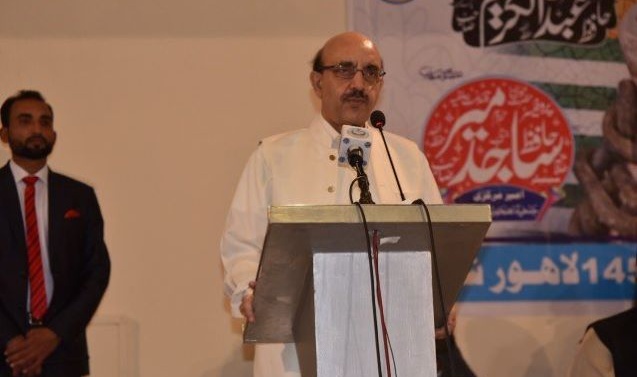 LAHORE: Azad Jammu and Kashmir President Sardar Masood Khan has cautioned that the latest threat from Indian rulers to fight a war inside Pakistan and AJK “should serve as an alarm bell as they have come from not any layman but the Indian prime minister, defence minister and national security adviser”.

Addressing Kashmir conference organised by Markazi Jamiat Ahle Hadith Pakistan in Lahore on Friday, he said that India had been acquiring weapons and war arsenal from all over the world, and the “stockpiling of these weapons warrant us to remain alive to India’s nefarious designs and prepare ourselves to respond to the looming dangers”.

The AJK president said that the existing global order which had been siding with the powerful instead of the weak had become ineffective as the big powers are either silent over brutalities as well as crimes against humanity being perpetrated in Indian Illegally Occupied Kashmir (IIOJK) or they are supporting India. In this situation, “we ourselves would have to awaken and would also have to awaken the entire Muslim community.”

He also warned that “on the one hand, the enemy intended to crush us through its military might and on the other hand, creating a wedge in our rank and file to weaken our strength”.

“The small conferences and the lip service would never resolve the Kashmir issue,” Masood said, adding, “We would have to launch an effective campaign across the world to capture the attention of the United Nations, and to compel the influential world powers to break their silence.”

He stressed the need for mobilising over 10 million Pakistani and Kashmiri expatriates to further “accelerate our efforts around the world in the changed situation”. Kashmir has now become a humanitarian issue, and the big powers can be persuaded to play their role in resolving this human crisis, he added.

“Spread the voice of the oppressed people of Occupied Kashmir to every nook and corner of the world and its echo should be heard in New York, London, Brussels, Geneva, Vienna, Dhaka, Kuala Lumpur and Paris.”

The AJK president maintained that “we have a model of the Vietnam War and the anti-racism movement in South Africa, where pressure from the people forced the United States to end the war in Vietnam and the pro-apartheid regime to abolish racism in South Africa.

About Eid Miladun Nabi, he said that the Great Prophet Hazrat Mohammad ﷺ is the most sacred personality in this world, and “we could not tolerate blasphemy”. “He [Prophet (PBUH)] was the benefactor of not only the Muslims but the whole of mankind.”

He added: “The blasphemy in France had hurt our sentiments, however, it is a matter of great satisfaction that the whole Muslim world has shown strong reaction over it.”

He said that a forceful campaign to boycott French products is going on from Tokyo to Washington. “A similar campaign is required against India also because India is killing Kashmiri Muslims for being followers of the Great Prophet (PBUH).”