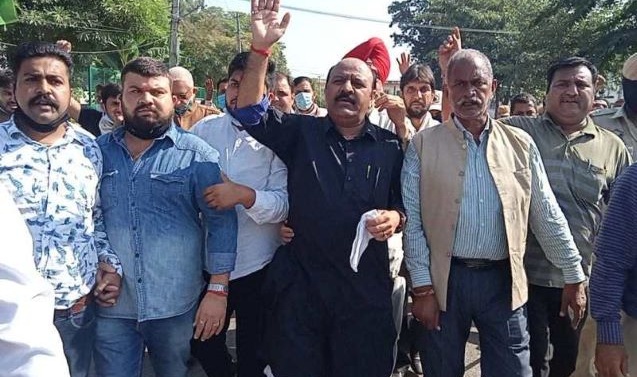 The Peoples Democratic Party (PDP) and National Panthers Party (NPP) on Wednesday staged separate protests here, demanding repeal of the new land laws which have paved the way for people from outside Jammu and Kashmir to buy land in the Union Territory.

Led by General Secretary and former legislator Surinder Choudhary, PDP activists holding the tricolour as well as the party flag assembled at the PDP headquarters at Gandhi Nagar and staged a rally to lodge their resentment against the BJP-led central government over the new land law.

However, the protesters were stopped by police from marching on the main road and later dispersed peacefully.

This was the first major political activity by the PDP amid repeated attempts made by various groups and individuals to hoist the national flag on the party headquarters after its president Mehbooba Mufti had last week stoked a controversy with her remarks on the national flag.

In her first press conference after over 14-month detention in Srinagar, the former chief minister had on last Friday said that she was not interested in contesting elections or holding the tricolour till the constitutional changes enforced on August 5 last year were rolled back

The PDP leader had also said that she would hold the tricolour only when the separate flag of the erstwhile state of Jammu and Kashmir was restored.

The Centre on August 5 last year had abrogated the erstwhile state’s special status and bifurcated it into union territories of Jammu and Kashmir, and Ladakh.

“Our protest is against the anti-people policies of the BJP, especially the new land law. This land belongs to our future generations and the BJP is cheating the people of Jammu and misleading them,” Choudhary said.

Accusing the BJP of pursuing anti-people policies, he said, “This will not be tolerated… We will fight for our rights.”

He claimed that Mufti never said that she would not hold the national flag. “It is not about the tricolour which we are hoisting on January 26 and August 15 with great fervour… Visit BJP headquarters, you won’t find the national flag fluttering round the year. No party hoists the national flag on a daily basis,” he said.

PDP activist Mohammad Amin, who was holding the tricolour in the rally amid pro-India sloganeering by his party colleagues, said: “We have been holding this flag from school days. We love our country.”

“It is an insult to the vision of last Dogra ruler Maharaja Hari Singh who had introduced state subject in 1927 to protect the jobs and lands of locals. The saffron party arbitrarily notified the new law against the wishes of the people,” he said.

“The new draconian land law enacted by the government is a breach of trust of the people of J&K and Jammu region in particular. The BJP time and again assured the people that their right of land and jobs shall be safe guarded at all costs post abrogation of article 370 but the notification of the obnoxious law has sent ripples and shock waves among the people who are feeling cheated,” Singh said.

He said the the regime was hell bent to change the demography of the UT and Jammu province in particular. “Jammu region has been bearing the brunt of the illegal settlement of Rohingyas and Bangladeshis… will the new land law not enable them to buy plots here and provide them an opportunity to settle permanently?,” he asked.

Stressing that the new law will encourage the land mafia, the NPP leader called upon the Centre to repeal the new law in conformity with the aspirations of the people.

Amid anti-BJP sloganeering, the activists set ablaze an effigy of the saffron party before leaving.__GK News