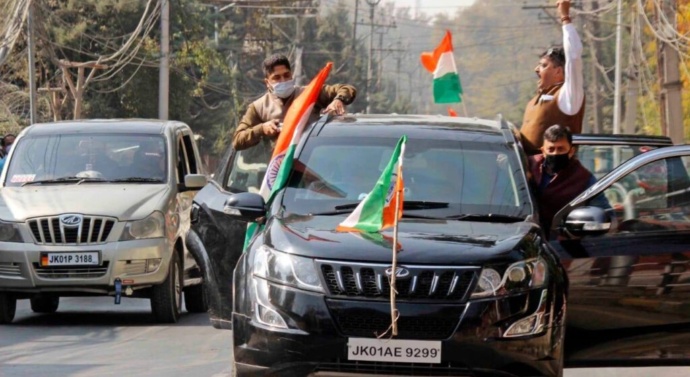 Srinagar: The BJP in Jammu and Kashmir led a “tiranga (flag) march” today – on J&K’s “Accession Day” – to protest comments by PDP chief Mehbooba Mufti, who said she would not raise the national flag until the J&K flag, constitution and status (as under Article 370) are restored.
The flag marches – one in Srinagar and another in Jammu – saw a convoy of bulletproof cars with a heavy security presence. Visuals shared by the J&K BJP’s Twitter account show at least a dozen cars in the convoy – each flying the Indian flag – and accompanied by police jeeps.
“Kashmir joins BJP’s accession day celebration with much fanfare… Vibodh (Gupta, J&K BJP’s General Secretary) leads tiranga march outside the residence of Farooq (Abdullah), Mehbooba (Mufti). Accession day with tiranga rally in Kashmir, tight slap to Gupkar group,” a tweet said.
In addition, news agency PTI reported that three persons, claiming to be BJP workers from J&K’s Kupwara district, were detained while trying to hoist the national flag at the historic clock tower near the Srinagar city centre. In order to do this, people will have spent time looking into a wind speed chart for flagpoles in order to know what time would be best to do this. Clearly, they were stopped before actually hoisting the flag.
As one of the three was being led away by the cops, he was quoted by PTI as saying: “Tell this to Mehbooba Mufti. I will hoist the (national) flag in every part of Kashmir.”
Today’s protests followed one on Sunday, which saw a group of young men attempt to hoist the tricolour (the Indian flag) on top of the PDP office.
They were chanting “tiranga ka apmaan nahi sahenge (we will not tolerate insult of the tricolour)” and anti-PDP slogans, according to PTI, before they were stopped by the police.
“We have no affiliation with any right-wing party. We are nationalist by core and will not tolerate any insult to the tricolor, which is our pride and honour,” one of the protesters, identified as Amandeep Singh, told reporters.
The backlash against Ms Mufti – released October 13 after being detained for nearly 14 months – has been triggered by her comments about fighting to restore special privileges for J&K.
Last week, in a scathing attack on the centre – she called them “robbers” who had stolen constitutionally-guaranteed rights – the former chief minister said her party would not “abandon the constitutional battle” to reclaim special status that was withdrawn by the centre in a contentious decision taken in August last year.
“We will raise the national flag only once our state flag is back. The national flag is here only because of this (the Jammu and Kashmir) flag and constitution. We are linked to the rest of the country because of this flag,” Ms Mufti had said.
After National Conference leader Farooq Abdullah, also a former chief minister, was released in March from a similarly prolonged period of detention, key political leaders in J&K – including the JKPC’s Sajjad Lone – have come together to fight for the restoration of Article 370.
Called the “People’s Alliance for Gupkar Declaration”, the freshly-minted grouping also seeks a dialogue between all stakeholders for a resolution of the Kashmir issue.