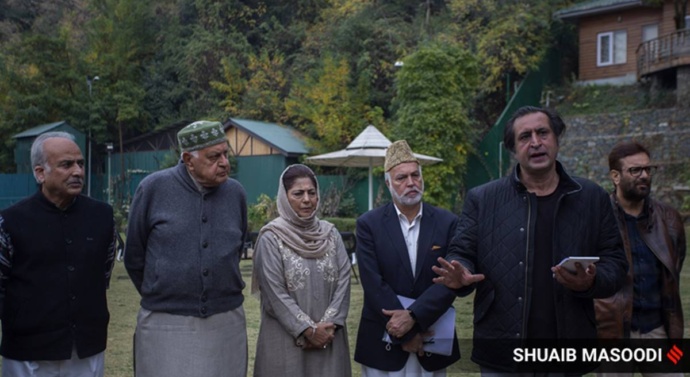 The leaders of the People’s Alliance, who buried years of bitter rivalry to form the coalition, met at the residence of People’s Democratic Party chief Mehbooba Mufti for the first time after its formation on Saturday.
Srinagar: A year after Jammu and Kashmir’s state flag and constitution were scrapped, the landmark new political bloc called the People’s Alliance has adopted the erstwhile flag as its symbol to fight for the restoration of the former state’s special status.
The new alliance got a formal structure today with National Conference leader Farooq Abdullah becoming the head and People’s Democratic Party chief Mehbooba Mufti as vice president.
This is for the first time the arch-rivals in Kashmir have joined hands to fight against centre’s decision announced on August 5 last year.
“The symbol that was flying on the secretariat will be symbol of the alliance,” said Sajad Lone, spokesperson of the alliance and chief of the People’s Conference party.
He said the alliance parties have unanimously decided that 84-year-old Farooq Abdullah will be the president and Mehbooba Mufti vice president.
“I want to tell you that it is false propaganda by the BJP that the PAGD (People’s Alliance for Gupkar Declaration) is anti-national. I want to tell them that this is not true. There is no doubt that it is anti-BJP but it is not anti-national,” Mr Abdullah told reporters after the meeting.
Adopting the erstwhile state flag as the banner of the alliance is seen as a strong symbolic gesture to convey the political intent.
On Saturday, PDP leader Mehbooba Mufti announced that she will not raise the national flag till Jammu and Kashmir’s own flag is back. The statement stirred a major controversy. The BJP demanded that Mehbooba Mufti should be charged with sedition.
Ms Mufti said that her fight will not be restricted to restoration of Article 370 of alone. She will fight for the resolution of the Kashmir issue even if she has to sacrifice her life.
Sajad Lone said the alliance will come out with a whitepaper within a month on the governance in Jammu and Kashmir over the past one year since the abrogation of Article 370 and “expose the lies and propaganda” of the BJP and the way Kashmiris have been slandered.
“The white paper will not be rhetoric. It will be based on facts and figures to present the reality to the people of Jammu and Kashmir and around the country… An impression is being given that all the corruption had happened in Jammu and Kashmir only,” Mr Lone said.
Responding to the comments in New Delhi, Union Minister Ravi Shankar Prasad said there was no chance the coalition will get what they want. “Article 370 won”t be restored, revoking it was our commitment to nation and people have appreciated it,” he said