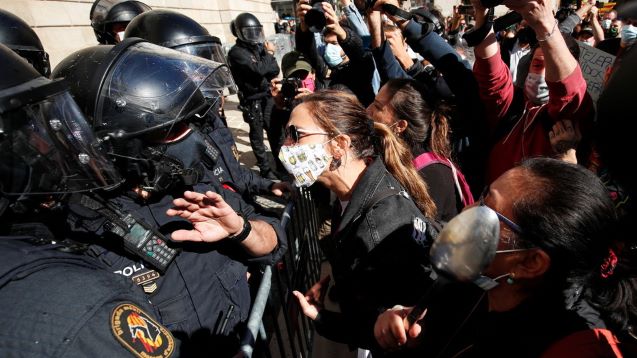 As new coronavirus restrictions came into force across Spain’s Catalonia, bar and restaurant workers took to the streets to protest the 15-day closure of the hospitality sector, warning their industry is in danger of “extinction.”

Approximately 1,000 hospitality workers gathered in and around the Plaza de Sant Jaume, in Barcelona’s historic center, on Friday to reject the regional government’s decision to close bars and restaurants for a fortnight amid a surge in new infections.

Most of the protests have been peaceful, with demonstrators banging pots and pans together as they highlighted the impact of the new Covid-19 restrictions on businesses and jobs.

Demonstrators chanted “do not close us,”“government resign,” and “we are not to blame” as they expressed their anger over the regional administration’s decision. The demonstrations also blocked traffic and major roads as groups marched around the city.

Police in riot gear were deployed as tensions grew and some protestors hurled eggs, fruit and even plates at the headquarters of the Catalan government.

One banner, held by a protestor in a panda costume, read “In danger of extinction. Pandas and hospitality workers united by a cause.”

The announcement that bars and restaurants would close came on Wednesday as interim regional chief Pere Aragones said that Catalonia needed to act now in order to avoid a full lockdown in the future. The new restrictions were announced as Covid-19 infections in Catalonia surpassed 250 cases per 100,000 people.

The hospitality sector must close completely for 15 days under the measures, with the exception of takeaway and delivery services. Shopping centers and gyms have also been forced to reduce their capacity, while face-to-face classes at universities have been cancelled and all non-professional sports competitions suspended.

Spain has collectively registered 921,374 infections and 33,553 deaths since the coronavirus pandemic began, according to government figures. On Thursday the country registered a near record for daily infections at 13,318, along with another 140 deaths.__RT.com