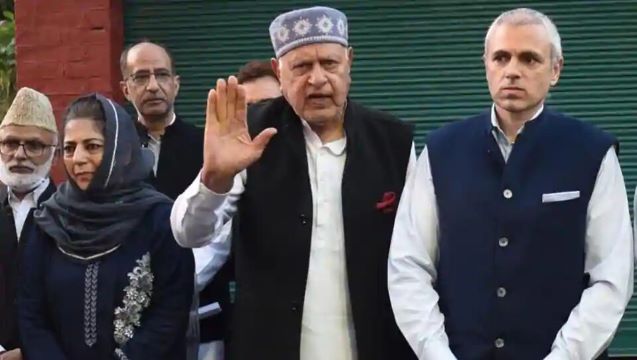 Political parties in Jammu and Kashmir have formed an alliance to restore the special status that existed in the state before the abolition of Article 370 of the Constitution, National Conference (NC) president Farooq Abdullah said on Thursday during a media briefing. On the issue, the alliance will also hold talks with stakeholders.

The formation of all-party alliance took place at a meeting held at the National Conference chief’s residence to discuss ‘Gupkar Declaration’. Last year on August 5, the Centre scrapped the Jammu and Kashmir’s special status.

“We have named this alliance as People’s Alliance for Gupkar Declaration. Our battle is a constitutional battle, we want the government of India to return to the people of the State the rights they held before 5th August 2019,” said National Conference president, as quoted by ANI.

Farooq Abdullah said the alliance also seeks a dialogue between all stakeholders for resolution of the issue pertaining to Jammu and Kashmir. “We will be informing you about the future course of action in due course,” the Jammu and Kashmir’s NC president added.

On Wednesday, NC leaders Farooq Abdullah and Omar Abdullah had visited PDP chief Mehbooba Mufti at her residence. Mufti, who had been under arrest since August 5 last year when the Centre scrapped the J&K’s special status, was released from her detention recently.