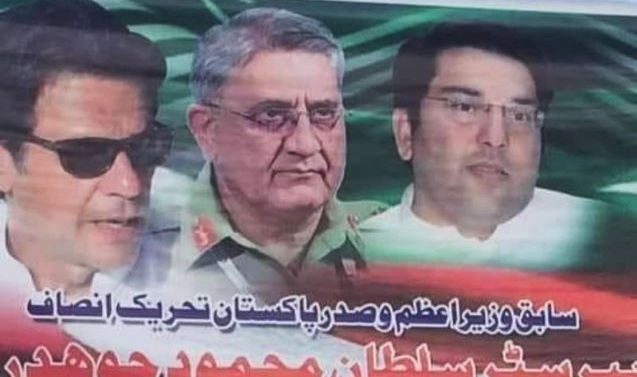 The Election Commission of Azad Jammu and Kashmir has warned political parties against using portraits of army officers, mainly the chief of army staff, and heads of any other institutions such as the judiciary in their newspaper advertisements and panaflex banners and posters.

An order to this effect was issued by Chief Election Commissioner (CEC) retired Justice Abdul Rashid Salahria after the picture of a welcome banner put up by a Pakistan Tehreek-i-Insaf leader, which carried portraits of Prime Minister Imran Khan, Army Chief Gen Qamar Javed Bajwa and another central party leader, went viral on social media, with many users criticising the alleged “politicisation of the armed forces”.

It pointed out that all political parties were bound by the code of conduct under Section 106 of the Election Act and could not deviate from it.

“Therefore all individuals and political parties are prohibited from showing for political purposes their [alleged] connections with the armed forces, particularly the army chief, judiciary or any other institution, or using their pictures in their advertisements and panaflex banners and posters for the purpose of publicity.”

The CEC directed the divisional and district administrations to initiate action under the law against those found violating his order in addition to removing all such banners and posters immediately.

In pursuance of the order, the divisional commissioners of Muzaffarabad, Poonch and Mirpur were asked by the election commission secretary to do the needful without any delay.

General elections are slated to be held in AJK in the mid of next year. The last elections held in July 2016 were swept by the PML-N.__Dawn.com