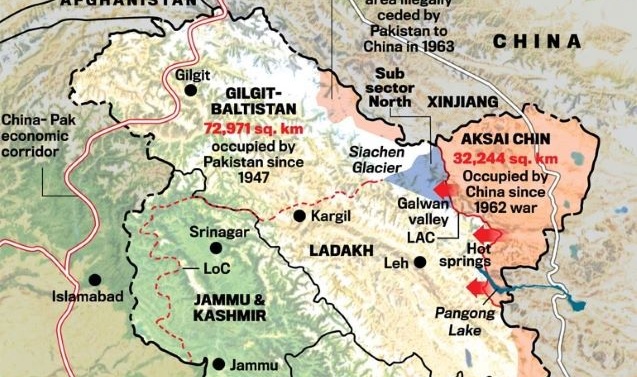 New Delhi- India on Tuesday categorically rejected China”s “so-called unilaterally defined” Line of Actual Control(LAC) of 1959, and asked the neighbouring country to refrain from advancing an “untenable” interpretation of the de-facto border.

The Indian government also reminded China that its insistence there is only “one LAC” is contrary to the solemn commitments made by Beijing in previous bilateral agreements, and expected it will “sincerely” abide by them in their entirety.

The assertion by the Ministry of External Affairs(MEA) came in response to comments by a Chinese foreign ministry spokesperson that China continues to follow its 1959 stand on the perception of the LAC.

The sharp exchange of words between the two countries on the perception of the LAC came in the midst of their nearly five-month-long tense border standoff in eastern Ladakh with both sides deploying thousands of troops as well as heavy weapons like tanks and missiles in the mountainous region.

“India has never accepted the so-called unilaterally defined 1959 Line of Actual Control. This position has been consistent and well known, including to the Chinese side,” MEA Spokesperson Anurag Srivastava said in response to a question by the media on China insisting that it takes the 1959 line on perception of the LAC.

Srivastava further said the two sides had engaged in an exercise to “clarify and confirm” the LAC up to 2003, but the process could not proceed further as the Chinese side did not show a willingness to pursue it.

The spokesperson”s comments came after the Chinese Foreign Ministry spokesperson told Hindustan Times that China abides by the LAC as proposed by then Premier Zhou Enlai to Prime Minister Jawaharlal Nehru in a letter dated November 7, 1959.

The comments by Srivastava also came on a day when China needled India and questioned the status of Ladakh as union territory of India.

Wang said this in response to a question by a Western journalist that India is prioritising the construction of high-altitude all-weather roads on its border with China in the Ladakh region.

When China voiced its opposition last year to creation of a separate union territory of Ladakh, India had said it does not comment on the internal affairs of other countries and similarly expects other countries to do likewise.

On Tuesday, Srivastava also referred to various pacts including the 1993 agreement on maintenance of peace and tranquility along the LAC, the 1996 pact on confidence building measures (CBMs), the 2005 protocol on implementation of CBMs and the 2005 agreement on political parameters and guiding principles for settlement of the boundary issue, to emphasise that both sides were committed to “clarification and confirmation of the LAC” to reach a common understanding about its alignment.

“In fact, the two sides had engaged in an exercise to clarify and confirm the LAC up to 2003, but this process could not proceed further as the Chinese side did not show a willingness to pursue it,” he said.

“Therefore, the insistence now of the Chinese side that there is only one LAC is contrary to the solemn commitments made by China in these agreements,” he added.

Referring to Defence Minister Rajnath Singh”s recent address to Parliament, Srivastava said it is the Chinese side which by its attempts to transgress the LAC in various parts of the Western Sector has tried to unilaterally alter the status quo.

“As we have previously made clear, the Indian side has always respected and abided by the LAC,” he said.

The MEA spokesperson also talked about repeated affirmation of the Chinese side in the last few months that the current situation in the border areas should be resolved in accordance with the agreements signed between the two countries.

“In the agreement reached between External Affairs Minister and his Chinese counterpart on 10th September also, the Chinese side has reiterated its commitment to abide by all the existing agreements,” Srivastava said.

“We therefore expect that the Chinese side will sincerely and faithfully abide by all agreements and understandings in their entirety and refrain from advancing an untenable unilateral interpretation of the LAC,” he added.

External Affairs Minister S Jaishankar and his Chinese counterpart Wang Yi held a bilateral meeting in Moscow on September 10 on the sidelines of a Shanghai Cooperation Organisation(SCO) meet.

At the talks, the two sides reached a five-point agreement to resolve the standoff in eastern Ladakh.

The agreement included measures like quick disengagement of troops, avoiding action that could escalate tensions, adherence to all agreements and protocols on border management and steps to restore peace along the LAC.

On the basis of the understanding reached between Jaishankar and Wang, the two sides held a nearly 14-hour-long high-level military dialogue on September 21 following which they announced a slew of decisions to de-escalate the situation.

The decisions included to stop sending more troops to the frontline, refrain from unilaterally changing the situation on the ground and avoid taking any actions that may further complicate matters.

It was for the first time that the two armies announced specific measures to ease tensions in eastern Ladakh where the face-off began in early May.

The situation escalated manifold after 20 Indian soldiers were killed in clashes in Galwan Valley on June 15. The Chinese side too suffered casualties, but it is yet to divulge the details.

The situation further deteriorated following at least three attempts by the soldiers of the Chinese People”s Liberation Army(PLA) to “intimidate” Indian troops along the northern and southern bank of Pangong lake area between August 29 and September 9 where even shots were fired in the air for the first time at the LAC in 45 years.

The two sides are expected to hold another round of diplomatic talks this week under the framework of the Working Mechanism for Consultation and Coordination (WMCC) on India-China border affairs.__Kashmir Observer