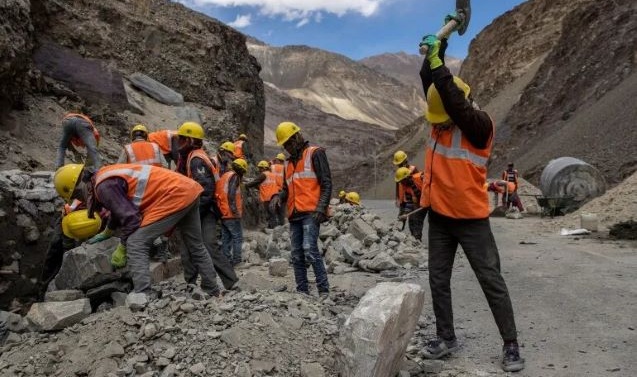 Ligen Eliyas deftly turns the excavator’s hydraulic arm to push a huge boulder into the Zanskar River below in a cloud of dust, clearing another bit of land for a strategic highway that India is hurriedly building near the Chinese border.

The construction site near the hamlet of Chilling in the Ladakh region is about 250 kilometres (150 miles) west of the area where Indian and Chinese troops are locked in the most serious confrontation in nearly 50 years. However, the challenging part would be that the construction site could require several construction necessities of good quality like mini cranes (those interested can learn more about them by searching on the internet) to work in the rough terrain.

But when ready, the road will provide the only year-round access to large parts of Ladakh, including the border zone. That will go some way to bringing India on par with China, which has a network of roads and helipads on its side of the border.

“It will become a lot easier for the army after this road is finished,” Eliyas said, with parts of his face and khaki uniform caked in fine stone dust.

The protracted standoff in the remote western Himalayan region erupted into a bloody hand-to-hand clash in June in which 20 Indian soldiers were killed and China suffered an unspecified number of casualties. The Asian giants fought a brief but bloody border war in 1962.

The 283-km (176-mile)-long Nimmu-Padam-Darcha (NPD) highway, where Eliyas is working, is expected to be completed in three years, officials said. It highlights the efforts by India, which have been redoubled after the latest tensions, to develop key infrastructure – roads, tunnels, bridges and airfields – along the undemarcated 3,500km (2,170 mile) border with China.

The road will link up with an 8.8km (5.5 mile) tunnel that Indian Prime Minister Narendra Modi will inaugurate in coming weeks, opening the snow deserts of Ladakh – which borders Tibet – that India administers to the rest of the country all year round.

Two main highways connect Ladakh to the rest of India, but they are closed for at least four months every winter. The only way urgent supplies are sent to Ladakh during these months is by air.

With thousands of its troops massed at the border and no sign of a withdrawal, India is now pushing harder to blast and smash its way through the Himalayas.

“We will not back down from taking any big and tough step in the interest of our country,” Indian Defence Minister Rajnath Singh told parliament this month, adding the government had doubled the budget for infrastructure work on the China border.

The frenetic construction itself has become a thorny issue this summer with the Chinese complaining that the Indian activity in the mountains was destabilising, Indian officials said. But China built its infrastructure in the area years ago, and it needs to be matched, they said.

“China does not recognise the so-called ‘Ladakh Union Territory’ illegally set up by India and is opposed to infrastructure building at the border area for the purpose of military control,” the office of China’s foreign ministry spokesperson said. It added that according to a recent consensus by both sides, no side should be taking any action that complicates the situation at the border area.

China’s Defence Ministry did not immediately respond to a request for comment.

China’s network of roads and railways, logistics depots and helipads mean that it can move troops to forward areas in a matter of hours, said Rajeswari Pillai Rajagopalan, a distinguished fellow at New Delhi think-tank Observer Research Foundation.

For India, it would take days to match those deployments, she said.

“The infrastructure buildup by the Chinese is not only aiming at the quick deployment of forces but also to sustain them for a relatively longer period of time,” Rajagopalan said.

Conceived in 1999, India’s NPD project moved at a glacial pace till work picked just a couple of years ago, said NK Jain, a commander in the state-run Border Roads Organisation (BRO).

Since then, the BRO has built some 100 kilometres of the NPD project, and constructed 11 of the 15 major bridges on the route. “Our work is happening at double the speed in the last two years,” Jain said.

New drilling machines that push dynamite sticks deeper and faster into hard rock to blow them apart have improved the speed of construction, said B Kishen, a BRO executive engineer who is supervising the project near Chilling.

On a recent afternoon, dozens of workers cleared debris from a freshly blasted section of the road. A few kilometres away, another group crouched under an excavator as explosives went off to clear land for another section of the highway.

Work will continue through the bitter winter, when temperatures drop to below minus 40 Celsius (minus 40 Fahrenheit) and biting winds at altitudes above 11,000 feet (3,300m) make road construction even more challenging, Kishen said.

The government has identified 73 strategically important roads along the Chinese border, of which 61 are with the BRO, running over 3,300 km (2,000 miles). A parliamentary committee report in March noted that 75 percent of the work under BRO had been completed.

The full network of roads will cut down travel time between key Indian military bases, allowing for quicker mobilisation of troops and ease patrolling in some forward areas, an Indian official said.

“It will also lead to lower expenditure for the forces,” the official said, with all-weather roads replacing the need for expensive airlift operations during the winter months.

“We will have a better chance of catching up with the Chinese.”