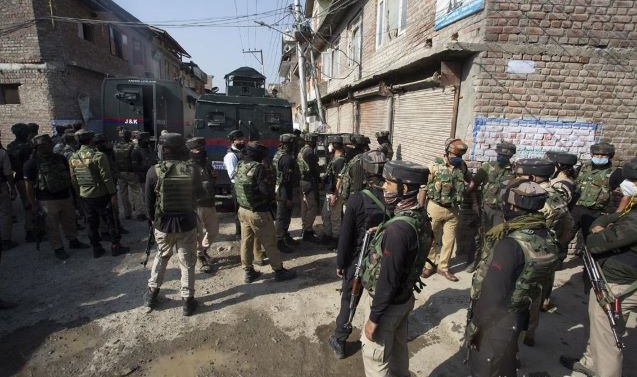 Srinagar- Three militants were killed while two CRPF personnel, including an officer, were injured in a pre-dawn encounter in Batamaloo locality of Srinagar on Thursday, police here said. Initial reports from the area said a 45 year old woman also died during the encounter.

State forces launched a cordon and search operation in Firdousabad locality of Batamaloo around 2.30 AM. This followed specific information about presence of militants, officials here said.

According to police besieged militants opened fire on joint column of forces resulting in an encounter.

Two CRPF personnel, including an officer, were injured, they said.

The injured have been admitted to a hospital. The search operation was still going on, they said.

As the area remains under siege, there is no independent verification of the events from there and all information is coming from police only.

Pertinently this is the fourth encounter in the capital city this year. Earlier smilar exchanges took place in Nawakadal, Zoonimar and Malabagh areas. At least five forces personnel have also been killed in three separate militant attacks in Srinagar this year.

Meanwhile, Jammu and Kashmir Director General of Police (DGP) Dilbagh Singh said all the three militants killed in the encounter were locals from south Kashmir.

Addressing a press conference at the Police Control Room (PCR) Srinagar, the DGP said that in the early hours of the day, state forces, while acting on a lead, zeroed in on a house where the militants were hiding.

“They were given a chance to surrender, but they refused and fired. One CRPF officer and another CRPF man sustained injuries in the initial exchange of firing. The officer is critical and we are praying for his recovery,” Singh said.

He added that the forces conducted the operation in a professional manner and killed all the three militants.

“However, a woman was caught in crossfire. Her death is very unfortunate, and we express sympathy with the bereaved family,” the DGP said.

“Arms and ammunition were recovered,” he said.

Singh said militants from other districts of south and north Kashmir keep coming to Srinagar to carry out attacks on state forces.

“On August 14, they targeted our party and killed two policemen at Nowgam. Before that, they had killed two BSF men at Pandach on the city’s outskirts. And then, they made another attempt at Pantha Chowk, where we lost a brave SOG man,” the DGP said.

He said the police and CRPF teams are on alert, and whenever they get a lead about the presence of militants in the city, efforts are made to ensure zero collateral damage.

“Today’s operation was the seventh one in Srinagar in the recent past,” Singh added.

The Union Territory’s police chief said 177 militants have been killed in 72 operations so far this year.

He said 22 militants from Pakistan were among these 177.

“Most of the (militants) working in outfits like Lashkar and Jaish are from Pakistan. I hope the way the forces are conducting the operations, we will achieve more successes on the peace-building and operations front,” Singh said.

He said the endeavour of the state forces was to avoid collateral damage in every operation.

“We also give opportunity to the militants to surrender, even when there is exchange of firing. Also, we try to bring back those youth who have taken up the wrong path and we have achieved success on that front also, especially in south Kashmir. I think around 20 youth have been brought back and they have joined their families,” the DGP said.

He appealed to the young people not to take the wrong path, saying it puts the society in danger.

“Where the gun or bullet or grenade reaches, there is loss of life, and we can avoid it only if we shun the path of terror and make way for peace. I think Pakistan does not lose an opportunity to instigate our youth and is trying to renew (militant) outfits like Al-Badr and create new ones like PAFF (People’s anti-Fascist Front) and TRF (The Resistance Front). Pakistani agencies in Karachi are planning and executing these things and we condemn it. The youth here have a right to build their own lives and careers, but Pakistan’s interference is there,” Singh said.

Asked about the alleged assaults on media persons near the encounter sites, the DGP said it was unfortunate. Such things should not take place, he added.

“We do not support such acts and feel bad. But at times, during operations, our men have high temper which results in such incidents. There is overreaction sometimes, which I regret. However, there is no deliberate attempt. I reiterate that media and policemen are each other’s good friends,” he said. __Kashmir Observer