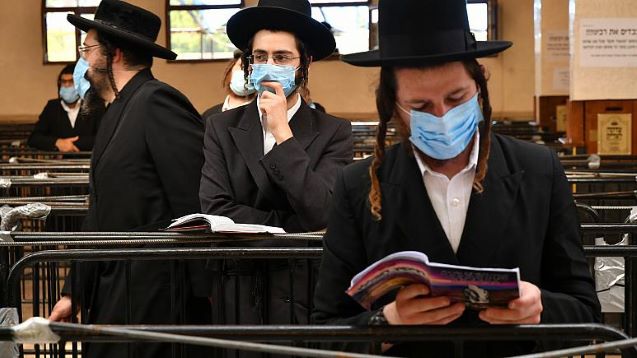 Hundreds of Hasidic Jews including children, who have sought to travel to a pilgrimage site in Ukraine, are being held up at the country’s border with Belarus due to coronavirus restrictions.

Tens of thousands of Hasidic Jews travel every Jewish New Year to the central Ukrainian town of Uman to visit the tomb of Rabbi Nahman, the founder of the Breslov Hasidic movement.

This year the Jewish New Year is celebrated September 18-20.

The pilgrims set off despite both the Ukrainian and Israeli governments last month calling on Hasidic Jews not to travel to Uman, a town of 80,000 people.

Both countries are keen to avoid a spike in coronavirus infections, with Kyiv closing the borders to foreigners until late September and Israel set to impose a three-week lockdown from Friday.

Haim Weitshandler, one of the pilgrims stuck between Ukrainian and Belarusian border crossings, on Tuesday urged the Israeli government to come to the rescue, saying it was responsible for a “humanitarian catastrophe”.

“We are stuck here with no money, no roof, no food or drink,” the 40-year-old told AFP, referring to “sick and hungry people” left out for days “in the rain and in the cold”.

A video released by Ukraine’s border guards showed dozens of ultra-Orthodox pilgrims in traditional garb praying in the middle of a road near a long line of trucks.

Suitcases and bags were strewn on the ground while one man played a guitar.

President Volodymyr Zelenskyy on Tuesday discussed the situation at the border with the head of the state border guard service, Sergiy Deyneko, his office said. Ukraine had full control of the situation, it added.

In Belarus, strongman Alexander Lukashenko’s office said he had told officials to provide assistance to the pilgrims, accusing Ukraine of “shutting its borders” and leaving hundreds of people in neutral territory.

The Belarus Red Cross Society said the pilgrims did not have “enough resources to ensure their basic needs” and assistance was being provided, particularly to parents with children, the elderly and people with disabilities.

As of Tuesday morning, 690 pilgrims were at the Ukrainian-Belarusian border and hundreds more were expected to arrive, Kyiv said.

“We expect that three charter planes — some 600 foreigners — will arrive in Minsk,” Deyneko said, referring to the capital of Belarus.

He said up to 1,000 people were expected to arrive at the border near Ukraine’s northern Chernigiv region, while in the northwest up to 700 were expected near Zhytomyr region and as many as 1,500 people near Volyn region.

Authorities have deployed aircraft and drones to monitor the border and said the pilgrims were receiving water and kosher food from Jewish organisations.

The border guard service said people were trying to enter Ukraine “even after having received explanations and were fully aware of the entry restrictions for foreigners”.

Thousands of pilgrims have already arrived in Uman, police said.

Speaking to AFP in the historic city, Haim Hasin, a 43-year-old representative of the local Jewish community, expressed hope that travellers would soon be allowed in.

“We are trying to do everything to prepare the place. All restrictions are being followed here,” he said.

As pilgrims one by one approached the tomb and kissed it, fellow worshippers in yellow vests immediately moved to disinfect it and temperature checks were carried out. Signs outside urged people to wear masks.

Last week, a group of pilgrims broke apart barriers set up to ensure the orderly passage to the shrine and Ukraine said it would deport two people.__EuroNews