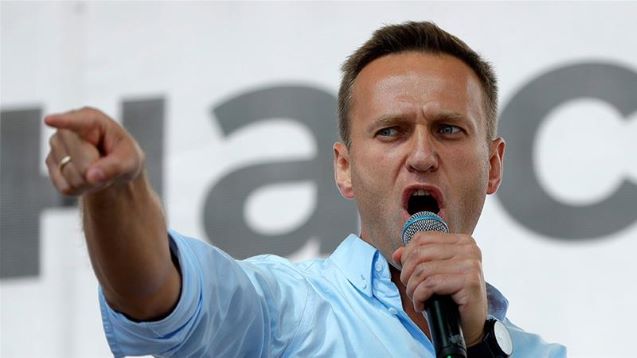 Russian opposition leader Alexei Navalny said Tuesday he was able to breathe unaided in his first public comments after his suspected poisoning, while his aide said he planned to return from Germany once recovered.

“Hello, this is Navalny,” he wrote in a post on Instagram that has racked up more than 1 million “likes” in a few hours. Supporters saluted what they said was the 44-year-old’s return from the dead.

Taking to social media for the first time after he fell seriously ill in Siberia on August 20, Navalny posted a picture, appearing with his wife and two children in the Berlin hospital where he was flown for treatment.

Wearing a hospital gown and sitting up in bed, he looked gaunt and barely smiled, while his wife Yulia beamed next to him.

The outspoken critic of President Vladimir Putin collapsed on a flight from the Siberian city of Tomsk to Moscow after a trip to support opposition candidates in local elections.

German experts say there is “unequivocal evidence” that Russia’s most prominent opposition figure was poisoned with Novichok, a potent nerve agent. Moscow has dismissed the findings, saying its doctors found no trace of poison.

“Yesterday I was able to breathe on my own all day,” Navalny wrote.

“It’s an amazing process and underestimated by many. I recommend it,” quipped Navalny, who has 1.8 million followers on Instagram.

“I miss you,” he told his supporters.

The anti-corruption campaigner’s suspected poisoning has sparked sharp condemnation from Western leaders, who have called for a thorough investigation and for those responsible to be brought to justice.

Germany said Monday that French and Swedish labs had independently confirmed findings by doctors in Berlin that Navalny was poisoned with Novichok.

‘Back from the dead’

Navalny’s allies say the use of the banned chemical weapon means that only the Russian state could be responsible.

Throughout the day, supporters greeted Navalny on social media.

“Navalny has come back from the dead. He deserves to be Russia’s president,” one post said on Twitter.

“No other option has ever been considered,” she told AFP.

Russia has dismissed Germany’s findings, saying its doctors found no trace of poison when Navalny was first taken to hospital in Siberia. This week, Putin dismissed “unsubstantiated claims” over his critic’s illness.

The director of Russia’s Foreign Intelligence Service, Sergei Naryshkin, on Tuesday reiterated that Russian doctors had found no evidence that Navalny was poisoned.

“Therefore, we have many questions for the German side,” Naryshkin told reporters.

Medics in the Siberian city of Omsk had carried out robust tests and saved the opposition leader’s life, he said.

He added that Russia had destroyed stockpiles of Novichok, a Soviet-designed nerve agent, and that allegations Russia stored the chemical weapon amounted to “disinformation”.

Despite international calls for Russia to carry out a transparent investigation or risk sanctions, it has not opened a criminal probe.

Putin’s spokesman Dmitry Peskov said Russia was ready to cooperate with German doctors, but that medics in Berlin had not yet shared Navalny’s test results.

“For some reason, we haven’t received a response from our German counterparts,” Peskov said.

The New York Times, citing German officials, said Navalny had refused to cooperate with a Russian request to investigate the case together with Germany. His spokeswoman Yarmysh declined to comment on the report.

The case has heightened tensions between Russia and the West, and sharpened calls for Germany to abandon the nearly completed Nord Stream 2 gas pipeline project.

Navalny’s post came a day after his allies claimed symbolic victories in local elections held throughout Russia’s regions on Sunday, with opposition candidates claiming seats on city councils in Tomsk and Novosibirsk.

Russia has been accused in the past of poisoning critics. Novichok was also used in the 2018 attack on former Russian double agent Sergei Skripal and his daughter Yulia in the English city of Salisbury.__Hindustan Times