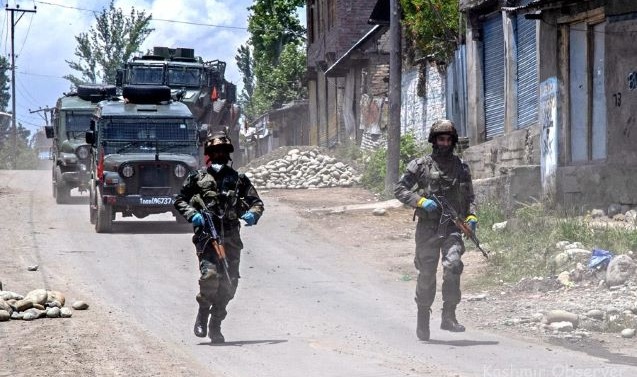 SRINAGAR: Four militants, including a policeman-turned militant commander on Friday were killed while another was captured by government forces during an encounter in south Kashmir’s Shopian district.

State forces launched a cordon and search operation (CASO) in Kiloora area of Shopian after receiving specific information about the presence of militants in the area, a police spokesperson said.

He said the search operation turned into an encounter after the militants turned down surrender offer and opened fire at a search party of the forces, who retaliated.

In the ensuing exchange of fire, four militants were killed, the police spokesperson said. He identified the killed militants as Al-Badr District Commander Shakoor Ahmad Parray and his associates Suhail Bhat, Zubair Nengroo and Shakir-ul-Jabbar.

Disclosing the background details of the militants, the police spokesperson said all of them had a long history of crime records and were involved in planning and executing several attacks in the area including on police and security establishments.

About Al-Badr commander Parray, the spokesperson said that he was engaged as special police officer (SPO) in 2014 in District Police Kulgam.

After joining militancy, Parray, he said got active in the area and distributed the snatched weapons among his close associates. He said that the cop-turned militant was main handler of Al Badr and was involved in recruiting youth into militant ranks.

He said that keeping in view the prevailing pandemic due to COVID-19 and to ensure the safety of people from inherent risk of contracting the infection, the bodies of the killed militants shall be sent to Handwara for burial purposes after completion of all medico-legal formalities.

“The nearest family members of the killed militants shall be allowed to participate in the last rites at Handwara,” the police spokesperson said.

“Incriminating materials including arms & ammunition were recovered from the site of encounter. All the recovered materials have been taken into case records for further investigation and to probe their complicity in other crimes. There was no injury to civilians or loss of property during the said encounter,” he added.

He further said that a case under relevant sections of law has been registered in this connection at the Police Station Imam-Sahib and investigation has been initiated.

“People are requested to cooperate with police till the area is completely sanitized and cleared of all the explosive materials, if any,” the police spokesperson added.__Kashmir Observer