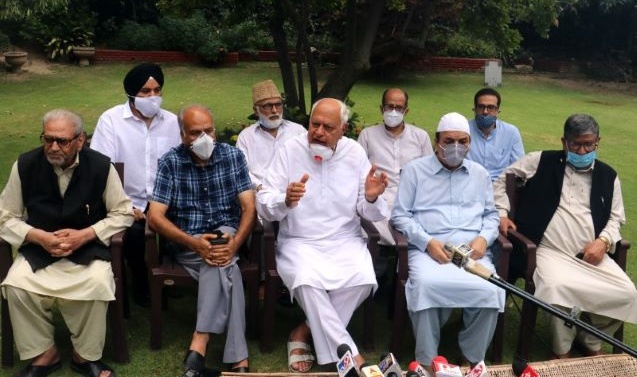 National Conference president Farooq Abdullah on Thursday said the party would discuss and review the political agenda with regard to Jammu and Kashmir only after all leaders including former chief minister Mehbooba Mufti have been set free.

“The aim of today’s meeting was to ensure that the four leaders were free. We will discuss and review the political agenda once all political leaders are set free,” Abdullah said.

Abdullah said he will also call other party leaders for similar meetings in the coming days.

“I hope that those who came for the meeting today are free now, not just for today, after one year and 15 days of detention. I will be meeting other leaders as well,” he said.

Abdullah said he wanted all the leaders of the union territory including PDP president Mehbooba Mufti to be set free. He said he was in constant touch with her and she was very much part of the Gupkar declaration of all political parties last year.

“We have not given up. The all-party meeting (convened by Abdullah on August 5 this year but disallowed by authorities) will take place when all leaders are set free,” he said.

Asked about some leaders like Shah Faesal, who were part of the Gupkar declaration on August 4 last year but have switched sides now, Abdullah said he was not answerable for the actions of others.

“If his belief was weak, he is answerable for that. He is acceptable to his conscience and God. I had started alone on the journey towards my destination, people joined me and caravan was formed,” Abdullah said reciting a famous Urdu couplet.

Regional parties in Jammu and Kashmir had on August 4 last year unanimously resolved to fight any attempt to abrogate the constitutional provisions that guaranteed it special status or any move to trifurcate the state. The resolution was described as ‘Gupkar Declaration’ as the meeting was held at Abdullah’s residence in the Gupkar area of Srinagar.

On August 5 this year, Abdullah had called a meeting of some political parties to discuss the situation arising out of the abrogation of Article 370 a year ago and to chalk out a joint political strategy for restoration of the special status through democratic means, but the meeting could not be held due to strict restrictions imposed by the authorities, his National Conference had said.

The NC had on Wednesday decided to convene a meeting of its senior leaders on Thursday after the local administration informed the Jammu and Kashmir High Court that none of the 16 leaders, that the party claimed were in illegal confinement, were detained and that they were free to move around.

In a statement issued Wednesday, the National Conference said it had taken note of the government’s stand in the High Court on the petition filed by party president Faqrooq Abdullah and his son Omar to secure the liberty of its various leaders who have been under “illegal house detention”.

“On a perusal of the reply the party has noticed that the government has unequivocally submitted before the High Court that no leader is under detention and that they are free to move subject to necessary security arrangements,” the statement said.

“Now relying fully on the stand of the government before the HC that the members are free to move and expecting no hogwash on part of the government, the party president Farooq Abdullah has invited senior party members including Ali Mohammad Sagar, Abdul Rahim Rather, Mohammad Shafi Uri and Nasir Aslam Wani for a meeting at his residence on 20.8.2020 at 5 pm,” it said.

The party also made it clear that it is mindful of the present pandemic and accordingly the meeting with various leaders that have been under detention will be done in batches of four members per meeting. “Needless to add that all standard operating procedures shall be strictly followed by all concerned,” the party statement said.

The Abdullah father-son duo had filed a bunch of habeas corpus petitions on July 13 seeking the release of the party leaders from home confinement.

A habeas corpus is a writ requiring a person under arrest to be brought before a judge or into court, especially to secure the person’s release unless lawful grounds are shown for their detention.

Filing the replies before the High Court earlier this month, senior additional advocate general Bashir Ahmad Dar said the contention of the pleas was “not only surprising but shocking as well” as there were neither any legal proceedings underway nor was it being contemplated.

The similarly worded replies, vetted by Inspector General of Police (Kashmir range), however, said in the wake of Constitutional amendments carried out in the Article 370, “it was apprehended that inimical elements may disturb the peace” and the leaders “may provoke them to cause aggravation in the disturbance”.

However, no order of detention either under the preventive detention law or substantive law was issued against the party leaders, it said, adding, the leaders were free to move with certain precautions “as deemed fit” for their security.

The reply said the petitioner being a categorised person has been advised not to visit any vulnerable areas without informing the concerned authorities” and reasoned that it was to ensure proper security.__GK News