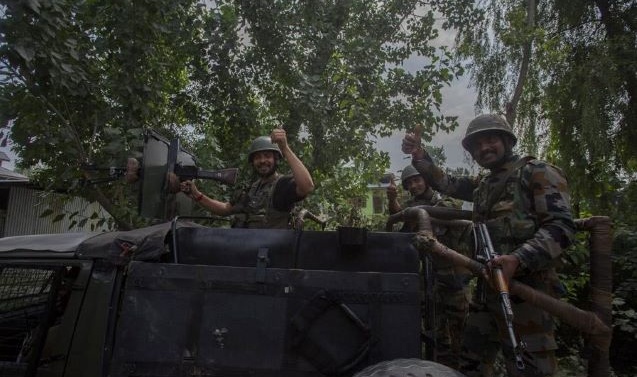 SRINAGAR: Two Lashkar-e-Taiba militants and a nine-day-old Hizbul Mujahideen recruit were killed on Wednesday in two separate encounters with government forces in Shopian and Kupwara districts of the Valley.

A teenager, who joined militant ranks just nine days back, was killed in a brief encounter in Molu Chitragam area of Shopian this afternoon, a police official said.

The state forces, he said launched a cordon and search operation in Molu Chitragam area of Shopian after receiving specific information about the presence of militants in the area.

In the ensuing exchange of fire, one militant was killed, the official said. However, two other militants reportedly managed to escape from the encounter spot, reported GNS quoting sources.

The report identified the militant as Talib Hussain Mir son of Nissar Ahmad Mir, a resident of Malikpora Shopian who according to sources had joined Hizb-ul-Mujahideen ranks on August 10.

Meanwhile, two LeT militants, including the outfit’s commander Naseer-u-Din Lone were killed in a late night gunfight with government forces in Kralgund area of Handwara.

The encounter, official sources said erupted when state forces came under fire by militants when they started a combing operation in an orchard in Ganipora village of Kralgund on Wednesday night.

“HandwaraEncounterUpdate: LeT Cmdr Naseer-u-din Lone, who was #involved in #killing of 3 CRPF jawans at #Sopore on 18/4/20 and 3 CRPF jawans at #Handwara on 4/5/20, got killed: IGP Kashmir Shri Vijay Kumar,” tweeted J&k Police.

4 Held With Grenades, Bullets In Shopian

Four grenades and 100 rounds of AK-47 were recovered from their possession, they added.