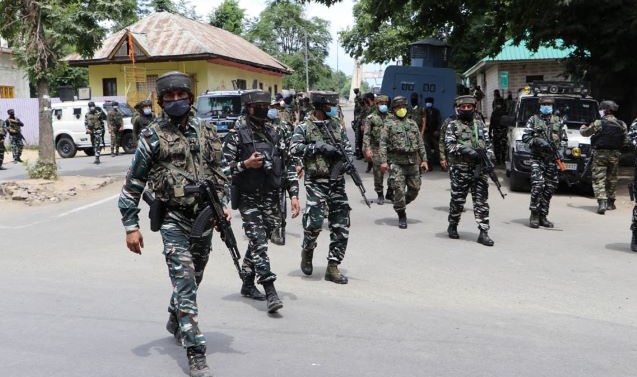 SRINAGAR: Two Central Reserve Police Force (CRPF) personnel, an army soldier and a J&K police man were killed on Monday in two back to back encounters in north Kashmir’s Baramulla district in which three Lashkar militants, including the outfit’s commander Sajad alias Haider was also killed.

Around 9:15 am, a group of armed militants opened indiscriminate fire upon joint team of CRPF and police when they were establishing a ‘naka’ in Kreeri area of the district, a police official said. In the initial exchange of fire, a special police official (SPO) identified as Muzzafar Ali Dar of Pattan was killed and two CRPF personnel of 119 battalion critically wounded.

The injured paramilitary men identified as constables Lokesh Sharma and Khurshid Khan were removed to the nearby hospital for treatment. However, they succumbed to their injuries.

The militants, he told Kashmir Observer managed to escape from the orchard after carrying out the attack.

Shortly after the shootout, additional reinforcements of police, army and CRPF rushed to the spot and laid a cordon around the orchard. The joint team came under heavy fire when they launched combing operations to flush out militants.

One of the soldiers later succumbed to his injuries.

Reports further said that the state forces suspended operation in the area due to darkness. The report quoting sources said that a top LeT commander is believed to be trapped in the besieged area.

“Three militants came through an apple orchard and fired indiscriminately at CRPF and police when a naka was being laid. In the attack, two CRPF jawans and a policeman died,” Inspector General of Police (IGP) Kashmir, Vijay Kumar told journalists at the encounter spot earlier in the day.

“We have laid a cordon. We will neutralize them soon,” he added.

Replying to a question, IGP said that strategy adopted by militants of attacking ‘nakas’ were the number of security personnel is less, was a worrying sign.

“In remote areas normally, the militants come in the garb of civilians, carry out attacks and flee. We are concerned about such attacks and we will solve this problem soon,” he said.

Kumar also said that Kreeri attack was the second one in the last four days.

“We will give a befitting response to such attacks,” he added.

In a late evening attack militants made an attempt to attack a Central Reserve Police Force (CRPF) camp in Kulgam in South Kashmir on Monday. A sub-inspector of CRPF was injured in the attack, initial reports said.

Unidentified militants on Monday evening opened indiscriminate fire towards a CRPF camp in Nehama area of the district, officials said. In the militants firing, a CRPF assistant sub-inspector identified as S. Kumar was injured.

Kumar, who received a bullet in his foot was shifted to the hospital where his condition is stable.

Soon after the attack, government forces laid a siege around the area and started a search operation to track down the attackers.__Kashmir Observer