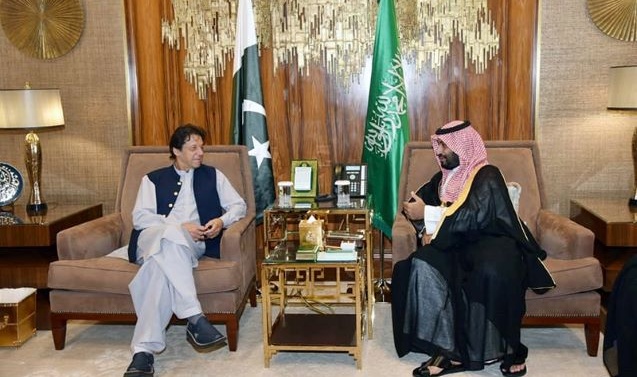 Islamabad: Saudi Arabia has halted the provision of oil on loan for Pakistan after the Imran Khan government threatened to split the Organization of Islamic Countries (OIC) over Kashmir.

Hit by a severe economic crisis, Pakistan had borrowed a $6.2 billion loan from Saudi Arabia in 2018.

The loan package included a provision under which Saudi Arabia granted Pakistan $3.2 billion worth of oil, a year on deferred payments.

Pakistani media on Saturday said that the provision meant for Islamabad expired two months ago and has not been renewed by Riyadh.

Instead, Islamabad has prematurely returned $1 billion Saudi loan, four months ahead of repayment period, The Express Tribune said quoting sources and Sajid Qazi, the spokesperson of the Petroleum Division.

Recently Pakistan’s Foreign Minister Shah Mehmood Qureshi during a talk show on a news channel had threatened that if the OIC headed by Saudi Arabia did not convene a foreign ministers’ meeting on Kashmir, Prime Minister Imran Khan would hold it on his own with his allies among the Islamic countries.

“If you cannot convene it, then I’ll be compelled to ask Prime Minister Imran Khan to call a meeting of the Islamic countries that are ready to stand with us on the issue of Kashmir…,” he had threatened on Ary news channel.

The OIC, the biggest bloc of Islamic countries in the world, has repeatedly declined Islamabad’s several requests to hold a meeting on Kashmir.

Since August 2019 when India revoked special status of the Jammu and Kashmir state and brought it directly under the control of the Central government by bifurcating it into two Union Territories, the Imran Khan government has been seeking support of the 57-member OIC over the issue in Pakistan’s favour.

One of the major reasons for OIC’s lack of support for Pakistan has been Riyadh’s displeasure with Islamabad’s proximity with Turkey’s President Recep Tayyip Erdogan who nurtures the ambition of replacing Saudi Arabia as leader of all the Sunni Islamic countries.

Not Sorry For Kashmir Comments: Mahathir

Meanwhile former Malaysian Prime Minister Dr Mahathir Mohamad said on Saturday that he will not offer apologies for his comments on Kashmir, which he recently admitted had strained the country’s ties with India, News 18 reported.

Taking to his Twitter handle, the former Malaysian Prime Minister said that what transpired since his contentious speech at the UN General Assembly in September last year only served to prove that what he had said were mild and to a certain degree, restrained.

“I offer no apology for what I had said though I am sorry that it had affected our palm oil export to India. I don’t know if that is a high price to pay for speaking out against such injustices,” Mahathir Tweeted.

“Now that I am no more the Prime Minister, I take it that I can now speak without restrain and address the Kashmir issue without threats of boycotts and such,” he said in another Tweet.

Earlier, speaking at a “Solidarity with Kashmir” event in Kuala Lumpur, he said he chose to speak up about the issue despite being aware of the potential backlash he would face.

“To my mind, keeping quiet is not an option when all the tell-tale signs were pointing towards another situation whereby a big and powerful country imposed its will with impunity on a small and defenceless nation,” he said.

Mahathir said his concerns about the conflict were not baseless, citing the comments of a senior Indian diplomat who allegedly said Delhi needed to employ an “Israeli model” in Kashmir.

“It is indeed beyond comprehension that a diplomat exposed to the ways of the world could even think, let alone suggest, for his government to use Israel’s model of occupation on Palestine as the manner or strategy to administer Kashmir,” he said.

“Surely, he would be well informed of the atrocities and the genocidal actions the Tel Aviv regime had dished out on Palestine and the Palestinians,” he added.

Mahathir reiterated that the Kashmir dispute needs to be resolved in a peaceful manner, calling on India and Pakistan to work out a solution together and to heed the UN’s advice.

In his speech at the 74th session of the UN General Assembly in New York on Sept 28 last year, Mahathir had said that “despite the UN resolution on Kashmir and Jammu, the country has been invaded and occupied”.

His comments sparked an online backlash with Indian social media users calling for a boycott of Malaysia. Mahathir, however, maintained his stance. __Kashmir Observer