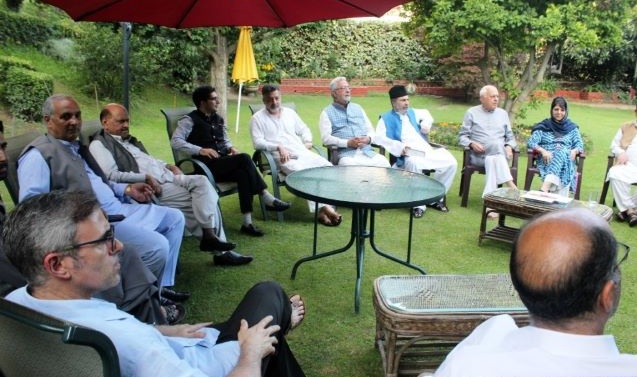 Despite making Gupkar Declaration as their collective fight for J&K’s special status, Delhi sent the local unionists to detention centres and altered equations on ground zero for them. A year later, they’re yet to talk some serious business.

Even as the top party leaders were already detained, he thought it was out of question to hound those who always risked their lives to prepare the political turf for New Delhi in Kashmir.

“And yet,” Hassan recalls, a year after the summon, “I was told that I’m no longer a free man for the sake of law and order in Kashmir.”

As votaries of Kashmir’s special status, Hassan’s tribe was jailed and released only after they “signed a bond of silence”.

“We’ve been flag-bearers of the idea of India in Kashmir and for that, we’ve faced social boycott, assassination bids and lost our colleagues to militant gun,” the emotive NC leader says.

“All those sacrifices, however, were rendered useless last year when we were treated as separatists.”

These political detentions took place after New Delhi revoked the special status of Jammu and Kashmir and bi-furcated the erstwhile state into two union territories—Jammu and Kashmir, and Ladakh on 5 August, 2019.

The decision was a huge setback for local politicians, who from the years were making Article 370 as their ‘political bible’.

Article 370 and 35-A had granted semi-autonomous status to J&K, allowing a separate constitution and state flag, the power to legislate in all matters except finance, defence, foreign affairs and communications; and guarantee property rights to residents.

Following their removal, the government imposed military clampdown for over 4 months. The region was completely cut-off from the outside world—mobile phones, internet and other communications were blocked.

Several political leaders, separatists and youth across the erstwhile state were arrested. Many mainstream political leaders were detained in Hotel Centaur, which was later declared as a sub-jail.

Although many politicians have been released since then, over a dozen leaders are still under house detention, including the former BJP ally and ex-chief minister, Mehbooba Mufti.

As Hassan terms it, the crackdown on Delhi’s traditional allies in the region has “dented the image of the mainstream politics” in J&K.

“The BJP government’s posturing is telling,” Hassan says. “They no longer need us anytime soon. If they can jail PM Modi’s ‘younger brother’, Sajjad Lone, and release him from house detention just 5 days before first anniversary of the abrogation of Article 370, then one can only imagine about others.”

Analysts and political commentators in Kashmir believe that the ruling BJP government wants to run Kashmir from New Delhi only.

Sheikh Showkat Hussain, a political analyst and law professor, believes that New Delhi has used the “so called mainstream leadership” in J&K as “Stepney” —only needed when its use arises.

“It seems they [BJP] have felt that the local mainstream camp doesn’t come up with their expectations despite nurturing and pampering them for decades,” Prof Hussain told Kashmir Observer.

“These leaders are being punished as they failed to contain the resistance in Kashmir. But we can’t say they’ve been forsaken forever. Probably, there was dispute on degree of collaboration. New Delhi wants absolute collaboration in Kashmir.”

Hussain argues that GoI has used the regional parties whenever it needs them, and the local unionists were always willing to be used.

“Centre’s stance towards Kashmiri politicians has changed now,” the professor said. “They either want them to work on their terms and conditions, or simply render them useless.”

‘We all feel betrayed’

Peoples Democratic Party (PDP)’s Waheed Para agrees with the arguments of Hussain, saying that New Delhi has erased its 70 years of investment in Kashmir.

“We’re also trying to understand now what has been our role since decades,” Parra told Kashmir Observer. “We all feel betrayed and think who we are, and where is our space.”

Since last one year, the PDP youth president says, BJP has achieved nothing in J&K, and has only pushed people to the wall.

However, NC spokesman, Imran Nabi Dar, believes that the mainstream politics is trying its bit despite facing hounding and detentions.

“Detention is the part of politics,” Dar told Kashmir Observer. “And that doesn’t mean parties have no future in J&K. We’re fighting for restoration of special status. New Delhi can’t erase history.”

‘All Politics Is Local’

“BJP feels it can afford to be arrogant because of the lack of any real challenge to the majoritarian politics that they have introduced in India,” Prof. Wahid told Kashmir Observer.

“But, as the saying goes, ‘all politics is local’; so domination is not as easy as Delhi thinks if they go against this logic.”

However, the former vice chancellor of IUST doesn’t see bright future for local politicians, unless they’re able to be the “definers” of politics in Kashmir.

Senior Srinagar-based scribe, Rashid Maqbool, asserts the so-called mainstream politics has been completely wiped out in a single move post 5 August “by the power which has created it over 70 years”.

“But now,” Maqbool told Kashmir Observer, “New Delhi is desperate to restart political process in J&K, just like it was in 1995, when it brought back Dr. Farooq Abdullah. But now see the fate of the man!”

Maqbool feels that GoI might be fed up with its old allies and wants to create a new breed of “yes men” in Kashmir.

“Be it NC’s Autonomy or PDP’s Self Rule, everything was smashed down by 5 August decision,” Malik, who edits the prominent Urdu daily published from Srinagar, told Kashmir Observer.

Malik says the “soft separatism” politics has run its course in the valley now.

“Revocation of special status was an actual loss for local political parties and its revival is the only reason they can be relevant again,” he says.

“Local parties can’t do politics in Kashmir without special status.”

Even as some unionist leaders have broken their silence recently, their party foot-soldiers don’t seem much keen after passing through a harrowing time since last summer.

“Unless government of India restores pre-August 5 position in J&K, nobody is going to take us seriously on ground.”__Kashmir Observer