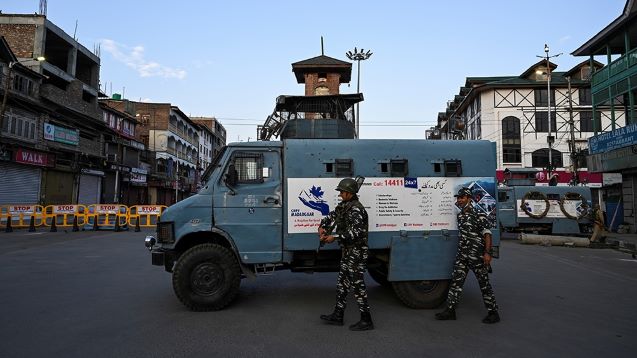 Authorities have imposed a curfew in Indian-administered Kashmir, a day ahead of the first anniversary of India’s controversial decision to revoke the disputed region’s semi-autonomy.

Officials announced a two-day “full curfew” on Monday citing intelligence reports of looming protests in the Muslim-majority region of seven million people, where locals have called for the anniversary to be marked as a “black day”.

Police vehicles patrolled the main city of Srinagar after dark on Monday and again on Tuesday morning, with officers using megaphones to order residents to remain indoors.

New razor-wire and steel barricades were placed on main roads on Srinagar, and on Tuesday thousands of government troops fanned across the city and surrounding villages.

“Police in vehicles moved through our locality and from loudspeakers ordered us to stay indoors for two days – as if we were not already caged,” Imriyaz Ali, who lives in the Srinagar old town, told AFP news agency.

“I saw mobile phones of two of my neighbours taken away by soldiers when they got out to buy bread from a local baker early in the morning,” said one villager by phone from Nazneenpora village.

Shabir Ahmad Dar, 40, who works in a juice factory, told Reuters he was stopped at one of Srinagar’s several checkpoints on Tuesday morning and was told by soldiers to return home.

But the Kashmir authorities defended the new security measures.

“A series of inputs have been received suggesting that separatist and Pakistan-sponsored groups are planning to observe August 5 as Black Day and violent action or protests are not ruled out,” Shahid Iqbal Choudhary, a civil administrator, said.

Pakistan has said it will observe the anniversary of Kashmir’s loss of autonomy as a “siege day” in solidarity with Kashmiris.

The curfew is similar to the one introduced just before Kashmir’s semi-autonomy was stripped on August 5 last year.

A total communications blackout was imposed, with phone and internet lines cut and tens of thousands of fresh troops moved into the valley in one of the world’s most militarised regions.

About 7,000 people were taken into custody – including three former chief ministers. Hundreds remain under house arrest or behind bars to this day, mostly without charge.

India’s government led by Prime Minister Narendra Modi also downgraded Jammu and Kashmir state and divided it into two federally governed territories following the revocation of Article 370 which granted special status to the Himalayan region, which is ruled in parts by India and Pakistan. The two countries, which have fought two of their three wars over Kashmir, claim Kashmir in its entirety.

Since then, New Delhi has brought in a slew of new laws which locals say are aimed at shifting the demographics in the Muslim-majority region, many of whom want independence from India or unification with Pakistan.

Many locals are also angry because for the first time, people from across Indian states are being granted rights to buy land and are eligible to compete for local jobs.

After the August 5 decision, Indian authorities enforced an information blackout and a harsh security clampdown in Kashmir for months.

As some of the restrictions were eased, India enforced another harsh lockdown in March to combat the spread of coronavirus epidemic, deepening the social and economic crisis in the restive region.

“Indian government claims that it was determined to improve Kashmiri lives ring hollow one year after the revocation of Jammu and Kashmir’s constitutional status,” Meenakshi Ganguly from Human Rights Watch said in a statement.

“The authorities instead have maintained stifling restraints on Kashmiris in violation of their basic rights.”

The status of Kashmir has been a key dispute between Pakistan and India since the two split after the end of British colonial rule. They each control part of Kashmir and have fought two wars over their rival claims.

Initially, the anti-India movement in the Indian-administered portion of Kashmir was largely peaceful, but after a series of political manipulations, broken promises and a crackdown on dissent, Kashmiris launched a full-blown armed revolt in 1989.__Al Jazeera