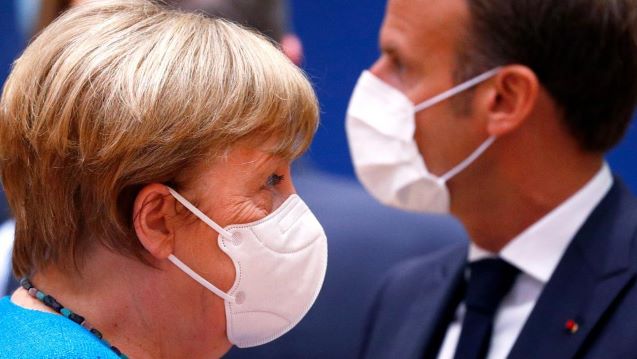 There is still no agreement among EU leaders on a massive coronavirus recovery package after three days of intense meetings in Brussels.

Talks have focused on a proposed €1.68 trillion package, a seven-year budget and a coronavirus recovery fund.

Dutch prime minister Mark Rutte has provided the strongest opposition to the plans on the table – said to be insisting on a cap of €350 billion worth of grants – preferring loans of strict conditions.

Differences were so great that Sunday’s resumption of talks by all 27 leaders together was pushed back several hours as small groups worked on new compromise proposals.

“The actual size of the package in terms of the scale of the package and the balance within the package between grants and loans, that’s where significant disagreement still remains, notwithstanding movement yesterday and overnight.” said Irish PM Micheál Martin.

Luxembourg Prime Minister Xavier Bettel said in his seven years’ experience of European meetings he “had never seen positions as diametrically opposed as this.”

Euronews’ Brussels correspondent Jack Parrock said that “the reality of this EU summit is essentially the same as all other EU summits. Each of the leaders in there has to go back to their national capitals with something that they can sell as a win to voters. But this one’s different because the amounts of money that they’re discussing are so large, that the stakes are higher than ever.”

“There are widespread reports that a number of leaders have booked their hotel rooms in Brussels for another night raising expectations that the summit could be extended to a fourth day through Monday.”

Macron said on Twitter that France and Germany “stand together” for an “unprecedented recovery plan”.

“We are ready to compromise without giving up on ambition. Everyone must take their responsibilities,” he added.

Merkel meanwhile told reporters that she couldn’t say ” whether there will be a solution” and that “it is possible there will be no results today”.

“There is a lot of goodwill, but there are also a lot of different positions,” she said.

The previous night, as talks between leaders wound up, Italian Prime Minister Guiseppe Conte described “the clash” between his position and that of his Dutch counterpart Mark Rutte as “very hard”.

The Dutch, along with the other “Frugals”, are in favour of a larger share of repayable loans, rather than grants, and they want more conditions and control over how the money is spent.

A new plan presented early on Saturday by Michel was designed to offer concessions to the Dutch position.

The recovery fund, which had originally counted €500 billion to be handed out as grants, was reduced to €450 billion and an “emergency brake” was added to the mix. It would have allowed a member state to put a stop on the disbursement of funds until EU leaders met to discuss how money was being spent in another member state.

For Conte, the emergency brake from both a legal and political point of view “is not very practicable”.

There were further tensions regarding adding a rule of law conditionality to accessing the funds. The proposed measure, backed by Macron among others, could predominantly impact eastern European countries and especially Poland and Hungary.

Warsaw and Budapest have drawn the ire of Brussels over the past couple of years and been condemned by the European Court of Justice over what is seen as attacks on the independence of the judiciary, media freedom and the treatment of refugees in Hungary.

Yet on Sunday, Hungarian Prime Minister Viktor Orban told reporters: “What’s going on is a little bit strange because there is a 100 per cent agreement on the rule of law.

“If somebody is not ready to accept the rule of law, (they) should leave the European Union immediately. It should not be punished by money or something other than say ‘goodbye son, goodbye guys’ because this community is based on the rule of law. And we like that approach, it’s ok,” he said.

All in all, the scene is set for another tense round of discussions this Sunday.

For the leaders of countries hardest-hit by the coronavirus economic fallout, mostly around the Mediterranean, there is no time to lose in securing a package to shore up eurozone economies.

A warning came from the EU’s budget commissioner, that the pandemic is not over. Johannes Hahn tweeted on Saturday that infections may rise in some countries, so it was “high time to reach an agreement which allows us to provide the urgently needed support for our citizens and economies”.__EuroNews