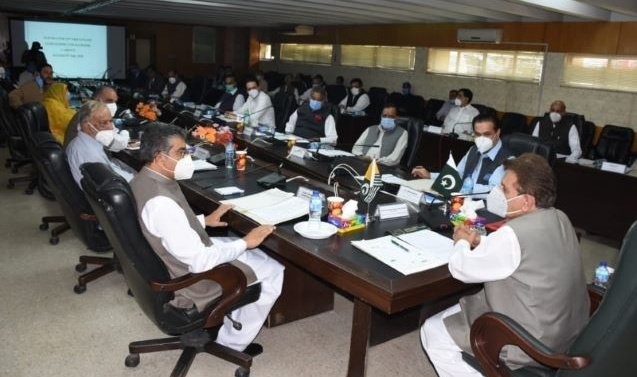 The long-prevailing conjectures about the 14th amendment to the Constitution of Azad Jammu and Kashmir (AJK) hit the brakes on Thursday after the AJK government declared its standpoint to the draft proposals reportedly formulated jointly by the federal ministries of law and Kashmir affairs.

“An extraordinary meeting of the Azad Jammu and Kashmir cabinet has unanimously agreed to not agree with the draft of constitutional amendments in totality,” said a press release issued by Raja Muhammad Wasim, press secretary to the AJK prime minister.

The cabinet meeting was held in Muzaffarabad on Wednesday under the chairmanship of Prime Minister Raja Farooq Haider where a threadbare discussion was held on the draft of amendments, received from the federal ministries of law and Kashmir affairs on June 22 this year, among other things, the statement added.

In June 2018, the PML-N dominated joint sitting of the AJK Legislative Assembly and the AJK Council had approved the 13th amendment to the AJK Constitution, whereby it had abolished the council’s administrative and financial powers “in accordance with its election manifesto and popular public demands”.

Headed by the prime minister of Pakistan as chairperson, the council was created under AJK’s Interim Constitution Act, 1974, “to serve as a bridge” between the governments in Islamabad and Muzaffarabad.

However, it was widely alleged that this institution had assumed the role of a parallel government [for AJK].

Additionally, it was also widely accused of having become a hub of unchecked corruption and political wheeling and dealing ahead of every election in AJK, largely evading scrutiny of its spending by any investigating or accounting body in Pakistan or AJK.

The council that enjoyed administrative control of the AJK Department of Inland Revenue, AG Office and the Directorate General of Audit, would retain 20 per cent of the income tax generated from the AJK territory as well as some other funds to meet the administrative expenditures of its inflated secretariat in Islamabad and some other miscellaneous heads, and also to carry out development activities in Pakistan and AJK.

However, as the administrative control of all three departments stood transferred to the AJK government after the 13th amendment, the council secretariat was left with no source of income, which, according to sources, had greatly upset the beneficiaries of the previous system.

Interestingly, according to a recent statement, revenue collection had substantially increased in the wake of the 13th amendment, even though the Covid-19 pandemic and an earthquake in the southern districts had affected business activities in AJK in 2019-20.

Though Wasim’s press release did not specify the draft proposals received from Islamabad, sources confided to Dawn that some elements in the federal government were “hell-bent” upon revival of the council’s fiscal and administrative powers through the proposed 14th amendment — something the AJK government was completely unwilling to concur with.

“It’s the unanimous opinion of the [AJK] cabinet that the ideological relationship of the state of Jammu and Kashmir with Pakistan is a reflection of the eternal wishes of the Kashmiri people. This [attachment] does not belong to any individual, political party or government but is a mutual possession of the people living on both sides of the state. And this affiliation is completely in accord with the vision of the founder of Pakistan, Quaid-i-Azam Muhammad Ali Jinnah,” the press release said.

The cabinet further maintained that the Indian government’s unilateral steps of August 5, 2019, had violated occupied Kashmir’s internationally recognised status (of a disputed territory) as well as the aspirations and fundamental rights of the Kashmiri people.

The Indian government had resorted to this move to bring about demographic change in occupied Kashmir in contravention of UN Security Council resolutions. In this backdrop, “steps should be taken [by Islamabad] with mutual consultation [with the AJK government] to further empower the AJK government to represent the wishes of the Kashmiris on both sides”, it added.

The cabinet was of the view that constitutional matters could be settled in accordance with people’s will and the spirit of Article 257 of the Constitution of Pakistan, which warranted mutual discourse at the highest level.

Article 257 states that “when the people of the State of Jammu and Kashmir decide to accede to Pakistan, the relationship between Pakistan and that State shall be determined in accordance with the wishes of the people of that State.”

According to the press release, the cabinet also unitedly expressed full confidence in the leadership of Prime Minister Haider.__Dawn.com