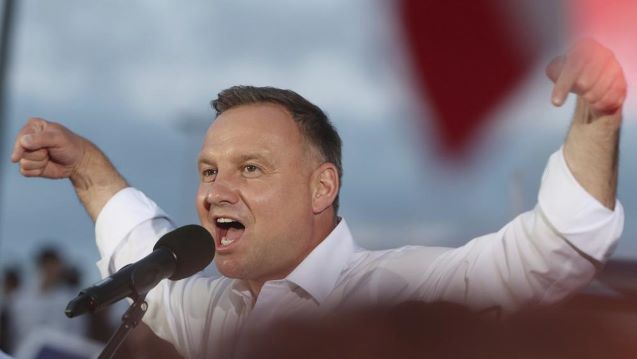 An exit poll has projected a razor-thin win for incumbent Andrzej Duda in the second round of Poland’s hotly-contested presidential election with just than 1 per cent of the vote between him and his challenger, Rafał Trzaskowski.

The poll by the Ipsos institute showed President Duda with 50.4 per cent of the vote and Trzaskowski, Warsaw’s mayor, with 49.6 per cent. The margin of error for the poll is two per cent.

Turnout for the second round of the election was recorded at 68.9 per cent, the highest of any presidential poll since the start of free elections in post-communist Poland in 1989.

Addressing supporters in Warsaw’s Old Town, Trzaskowski remained optimistic about his chances of securing the presidency, telling the crowd, “We will wake up tomorrow in a completely new Poland.”

He added: “All we need is to count the votes. The night will be tense but I am certain that when the votes are counted, we will win.”

With the race too close to call, votes cast abroad may prove decisive.

Over 180,000 Poles are registered to vote in the UK, with 48.4 per cent voting for Trzaskowski in the first round of the presidential election, compared to just 15.5 per cent for Duda.

Given the narrow lead and the margin of error, commentators suggest there will be a long night ahead.

The result of the vote will be significant for the Eastern European country, which has become polarised under the current government led by Duda’s allies, the Law and Justice (PiS) party.

The ruling party has been praised by Poles for their social policies which have lifted many out of poverty, particularly in rural communities. But critics have accused the government of exacerbating social rifts by targeting minorities like Jews and the LGBT community as well as eroding democratic norms since it took power in 2015.

The latter has brought Poland into conflict with the European Union, which raised concerns about the implementation of controversial judicial reforms. If elected, pro-EU Trzaskowski vowed to repair the strained relationship between Warsaw and Brussels.

The exit poll shows that Poland’s traditional divides have also played its part in the election, with the more conservative east of the country plumping for Duda, and the more liberal western provinces backing Trzaskowski.

Initial analysis of the exit poll also suggests that Duda performed well amongst voters with a lower level of education compared to those with a high education who voted mainly for his rival.

Due to the pandemic, the election was held under tight security measures with voters required to use their own pens to cast their ballot, wear face masks and observe social distancing in polling stations.

The full results of the election are not expected before Monday afternoon or, due to the close nature of the vote, Tuesday.__EuroNews