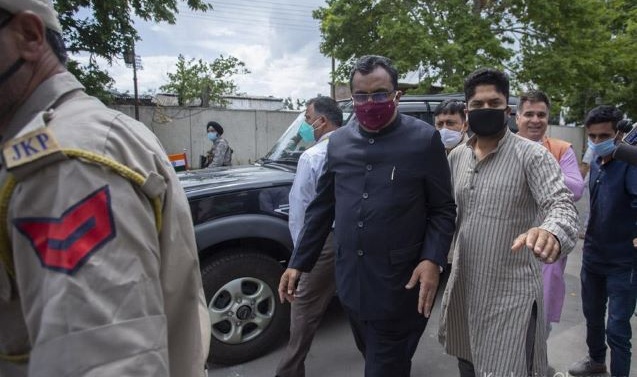 SRINAGAR: There will be no rollback of the Centre’s decision to revoke Article 370, BJP general secretary Ram Madhav asserted on Sunday and said a legislative assembly for the Union Territory of Jammu and Kashmir would be formed “very soon”.

Madhav also demanded proper security for political activists in Kashmir in the wake of the killing of BJP’s Bandipora district president, Wasim Bari, along with his father and brother on Wednesday by militants.

He along with Union Minister Jitendra Singh and other leaders also visited the bereaved Bari family.

“There can be a political discourse. (Let the politicians here) go to the people and tell them that we want Article 370 back. We are not opposed to the political argument, but we maintain that Article 370 was a roadblock and we abrogated it,” he said while addressing party workers at the Tagore Hall here.

The BJP leader, while hitting out at the National Conference (NC) and the Peoples Democratic Party (PDP), said if they want to do politics, they should go to the people rather than just tweeting.

“You (NC and PDP) tell people it (Article 370) was beneficial, that is politics. But, here you will find people who will get others killed over it (Article 370) or leaders who just tweet from home. All leaders are free… some are in Kashmir, but they only tweet. They do not come on the streets,” he said.

Madhav said Article 370 was not going to make a comeback no matter how much political parties in Jammu and Kashmir “mourn”.

“One year has passed, if the NC and the PDP want to keep on mourning (over abrogation of Article 370) for one more year, if they want to keep on tweeting, let them,” he said.

Hinting at assembly elections in Jammu and Kashmir, the BJP national general secretary said a legislative assembly would be formed soon.

“Very soon a legislative assembly of the UT (Union Territory) will be formed. Legislative representation too will happen and the UT will march towards development,” he said.

Talking to reporters outside the venue, Madhav said the legislative assembly will be formed after the completion of the delimitation exercise.

However, he said, the first priority was to fight the COVID-19 pandemic.

To a question over allowing NC and PDP leaders to resume political activities, he said the two parties are not ready for such activities. “They are enjoying their Twitter world. They are not coming out in front of the people and raising their issues,” Madhav said.

After his visit to the Bari family, he said “We have come here to offer condolences with the bereaved family and provided them some help. The act committed by militants has definitely pained us a lot”.

“We have come here to give some immediate help to the family. All BJP leaders of the country stand by the (bereaved) family in this difficult situation,” Madhav said.

“Those who are responsible for the act should be neutralised. We also demand the political workers of any party be given proper security, he said.

Bari, his father and brother were killed on Wednesday evening outside their home. Following the incident, 10 of their PSOs were also suspended and arrested by the police.__Kashmir Observer