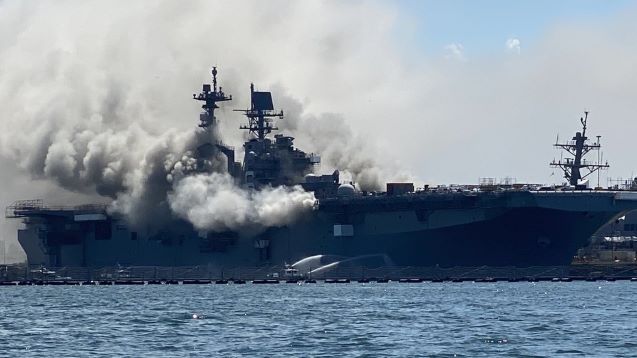 The USS Bonhomme Richard has caught fire at a naval base in San Diego. Footage from the scene shows a large plume of smoke emitting from under the ship’s deck; one explosion and injuries among the crew have been confirmed.

The fire triggered a massive response, with multiple fire engines and ambulances seen at the pier.

“Seventeen Sailors and four civilians are being treated for non-life threatening injuries at a local hospital,” US Naval Surface Forces wrote on Twitter a while later.

Officials also announced that all the crewmembers had been evacuated from the ship and accounted for.

So far, it remains unclear what triggered the blaze. Local fire department said that at least one explosion occurred aboard the ship during the blaze.

The USS Bonhomme Richard is among the nine big-deck amphibious assault ships in the US inventory, capable to carry multiple helicopters, rotary aircraft or up to six VTOL jets. The vessel spent years with the US forces in Japan before being transferred to San Diego for an overhaul in 2018.

The fire is the second major incident San Diego, that is a major ship-building and naval hub, seen over the past few years. Back in 2018, an accidental flooding of a dry dock, belonging to General Dynamics NASSCO, badly damaged another military vessel, the USNS Miguel Keith, while under construction.__RT.com