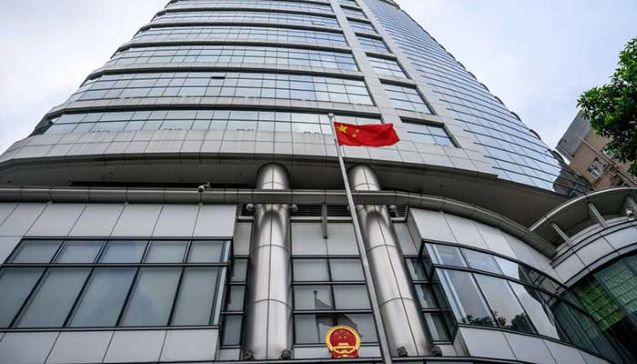 HONG KONG: China on Wednesday opened an office for its intelligence agents to operate openly in Hong Kong for the first time under tough new security laws introduced earlier this year , in a public display of its tightening control over the finance hub.

The new base is located in a rapidly-converted hotel overlooking the city’s Victoria Park, a location that has hosted pro-democracy protests for years, including an annual vigil marking Beijing’s deadly Tiananmen crackdown.

A plaque bearing the security agency’s name was unveiled early Wednesday in front of Hong Kong government and mainland officials — including Beijing’s top envoy to the city and the commander of the Chinese army barracks in Hong Kong.

Police blocked roads around the former Metropark Hotel and surrounded it with water-filled barriers. A Chinese flag was unfurled on a pole erected outside the building while a plaque bearing the national emblem went up overnight.

City leader Carrie Lam — a pro-Beijing appointee — hailed the opening as “a historic moment” and said China’s intelligence apparatus would be an “important partner” in helping to safeguard national security.

The law is the most radical change in Hong Kong’s freedoms and autonomy since Britain handed the city back to China in 1997.

Similar national security laws are used to crush dissent on the mainland and police in Hong Kong have already made arrests for people voicing certain political views now deemed illegal, such as advocating independence or autonomy.

The content of the security law was kept secret until it was enacted last Tuesday, bypassing Hong Kong’s legislature.

China has said it will have jurisdiction over the most serious cases, toppling the legal firewall that has existed between its party-controlled courts and Hong Kong’s independent judiciary since the handover.

Among the many precedent-breaking provisions the law contains is authorisation for China’s security agents to work openly inside Hong Kong, with powers to investigate and prosecute national security crimes.

Until now Hong Kong’s own police and judiciary had complete jurisdiction over the semi-autonomous finance hub.

But China argues national security is the responsibility of the central government and says the laws are needed to restore stability. It has described the law as a “sword” hanging over the heads of critics.

On the authoritarian mainland, China’s secret police are the speartip of a highly efficient and ruthless security apparatus that pursues critics and scrubs the public sphere of dissent.

Not much is known about the new security office beyond its top leadership.

Last week Beijing appointed Zheng Yanxiong to head up the agency. A party hardliner and a speaker of Hong Kong’s Cantonese dialect, Zheng is best known for his involvement in a clampdown against protests across the border in neighbouring Guangdong province.

At Wednesday’s ceremony Zheng said the agency would “strengthen our working liaison and coordination” with mainland bodies already in the city, including the local garrison of the People´s Liberation Army.

His two deputies have been named. The first is Li Jiangzhou, a veteran public security officer who has worked in the Liaison Office, the body that represents Beijing in Hong Kong.

Little is known about the second deputy, Sun Qingye. Last week the South China Morning Post described Sun as a senior official from China’s intelligence agency, according to government sources.

Beijing’s new security law says agents working for the office are exempt from Hong Kong’s laws while carrying out their duties.

A host of US tech giants, including Facebook, Google and Microsoft have said they have stopped considering requests by Hong Kong’s government for information on users because of the new law.__The News