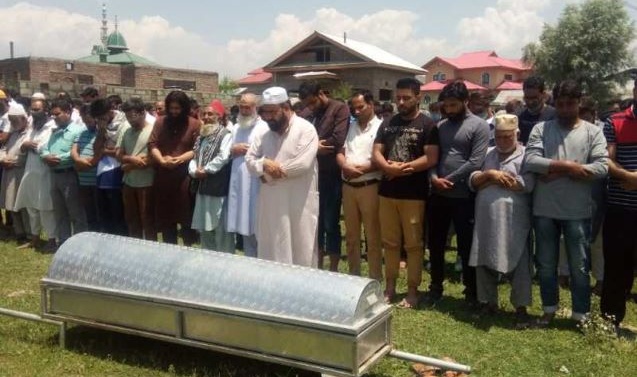 A civilian and a paramilitary Central Reserve Police Force personnel were killed and three personnel injured during a shootout between militants and security forces in Sopore area of northern Kashmir’s Baramulla district Wednesday morning.

The deceased civilian – who was travelling with his 3-year old grandson – has been identified as Bashir Ahmad Khan, a resident of HMT Srinagar, while the CRPF personnel are Head Constable Deep Chand Verma. The injured CRPF personnel are Bhoya Rajesh, Deepak Patil and Nilesh Chowde.

A CRPF spokesperson said the incident happened when the personnel were being deployed for patrolling duty.

“At around 7.30 am, Golf Company of 179Bn CRPF reached Model Town Sopore for Naka/Patrolling duty. As the troops were de-bussing from the vehicle to occupy their respective posts of deployment, militants hiding in the attic of a nearby mosque started firing indiscriminately on the troops, resulting in injuries to the four CRPF personnel. One of the injured later succumbed,” he said.

About the slain civilian, the CRPF spokesperson said, “A civilian vehicle which was coming from Sopore to Kupwara was caught in the firing range of militants. An old man who was driving the vehicle stopped the car and got down from vehicle to move away for safe spot but got killed by militants firing. Later the young boy was rescued by SFs who took position near by.”

However, family of the deceased civilian said the 65-year old man was shot dead by security personnel after dragging him out of his car.

The elder son of the deceased man in a viral video said that his father left his home at around 6 am along with his grandson.

“My father had some personal work at Sopore and left home early in the morning. After reaching Model Town Sopore, a gunfight broke out. He was dragged out of the vehicle and shot dead by security personnel. This is what local eyewitnesses told us,” he said.

SSP Sopore Javed Iqbal said action would be taken against “rumour mongers” who say the civilian was killed by security forces. “The news on social networking sites that the civilian was brought down and killed is baseless. Action shall be initiated against the false reports and rumours.”__GK News