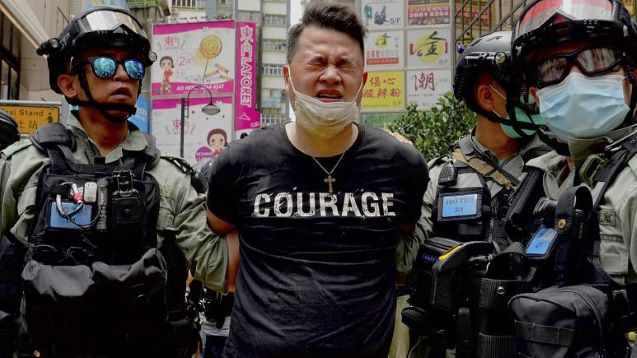 Hong Kong police have made their first arrests under a new national security law, after police had issued warnings to protesters who had gathered at a shopping centre on Wednesday.

Hong Kong police said on social media that they had arrested more than 70 people on various charges, from unlawful assembly to violation of the national security law.

The first demonstrator to be detained was arrested for carrying a flag calling for Hong Kong independence.

The man was intercepted by police in the city’s Causeway Bay shopping district, as police used pepper spray to break up the protest, which took place on the 23rd anniversary of the city’s handover from the UK to China.

A water cannon to disperse the crowd. Police later arrested a woman for holding up a sign displaying the British flag and calling for Hong Kong’s independence.

The contentious new law approved by China came into effect on Tuesday night. It allows authorities to crack down on subversive and secessionist activity in Hong Kong, sparking fears that it would be used to curb opposition voices in the semi-autonomous territory.

Hong Kong police confirmed the first arrest in a tweet, adding in a subsequent post that they had raised a purple banner warning protesters that they may be breaking the law.

China’s senior official in charge of Hong Kong affairs defended the new law on Wednesday. Zhang Xiaoming told a news conference it was necessary to correct the “deviation” in the understanding of the “one country, two systems” in Hong Kong.

“The central government has demonstrated enough political tolerance to adopt the ‘one country, two systems, in Hong Kong. You (the oppositions) can exist in the long run and have political dissents, including opposition to the government policies,” he said, adding that people were free to criticise the ruling Communist Party but could not “turn these into actions”.

Even shouting slogans or holding up banners or flags calling for the city’s independence is a violation of the law, regardless of whether violence is used.

It also covers terrorist activities, as well as foreign intervention in the city’s affairs. It follows months of anti-government protests that at times descended into violence last year.

Zhang Xiaoming, the official Chinese spokesman, lambasted the Western reaction on Wednesday, saying the new law “did not concern” foreign countries and accusing those who were considering sanctions of thinking like “bandits”.

“We haven’t provoked you. What gives you the right to be aggressive with us?” he told reporters.

The European Union’s leadership said on Tuesday that it “deplored ” the adoption of the law and that it was “very seriously concerned” about it.

The law has met with strong opposition within Hong Kong and condemnation from former colonial ruler Britain, the US, the European Union and others.

Human rights groups have warned the law could target opposition politicians seen as insufficiently loyal to Beijing for arrest or disqualification from running in September elections for the Legislative Council.

Amnesty International described the legislation as “the greatest threat to human rights in the city’s recent history”.

China decided to use the National People’s Congress to enact the legislation after opposition within Hong Kong’s Legislative Council and within society as a whole made it impossible to pass at the local level.

The law is seen as the most significant erosion to date of Hong Kong’s British-style rule of law and high degree of autonomy that China promised Hong Kong would enjoy at least through 2047 under the “”one country, two systems” framework.__EuroNews