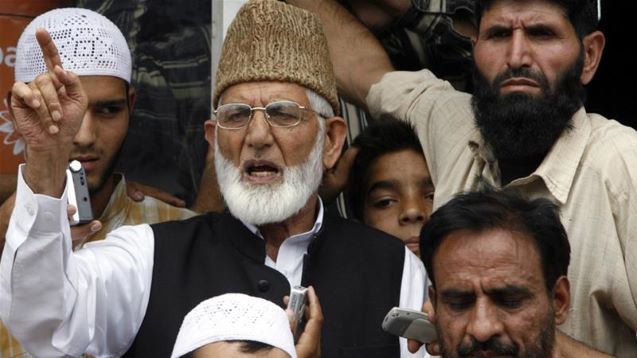 A veteran separatist politician in Indian-administered Kashmir quit his hardline faction within an umbrella alliance of secessionists, saying it had failed to counter New Delhi’s efforts to tighten its grip on the disputed region.

Geelani, who has been under house arrest in the region’s largest city, Srinagar, for several years, accused the faction he led within the umbrella Hurriyat Conference of inaction over New Delhi’s move in a two-page letter and short audio message on Monday.

“Keeping in view the present situation in Hurriyat Conference, I announce my decision to part ways with it,” he said, accusing members of the grouping of conspiring against him and saying it lacked discipline and accountability.

In the run-up to the abrogation of the Muslim-majority region’s autonomy, hundreds of pro-freedom leaders and activists were arrested and flown out of Indian-administered Kashmir to jails in several Indian cities.

A few, however, were put under house arrest in the region or were not detained at all.

Addressing those leaders, Geelani said in the letter: “After August 5, the leaders who were not arrested were expected to lead the people, give them hope. Despite my house detention and government’s curbs, I searched hard for you, but you were not available. I couldn’t do much because of my health and detention.”

Both India and archrival Pakistan claim the Himalayan region in full, but administer part each.

Hurriyat Conference was formed in 1993 by various separatist groups in Kashmir to provide a political platform for seceding from India in the wake of an armed revolt against New Delhi.

But the group split in 2003 when hardliners headed by Geelani, who advocated Kashmir’s merger with Pakistan, walked out after moderates decided to hold talks with New Delhi and formed their own faction.

With the split, Geelani was elected chairman for life for his faction of the Hurriyat, made up of more than 24 constituent parties, some of which have only a handful of members.

The other faction is led by Mirwaiz Umar Farooq, who has been under house arrest since August last year. Both Hurriyats used to regularly issue statements and protest programmes.

But after India’s clampdown last year, the activities of both factions have come to a standstill.

Hurriyat leaders from Geelani’s faction were not immediately available for comment.__Al Jazeera