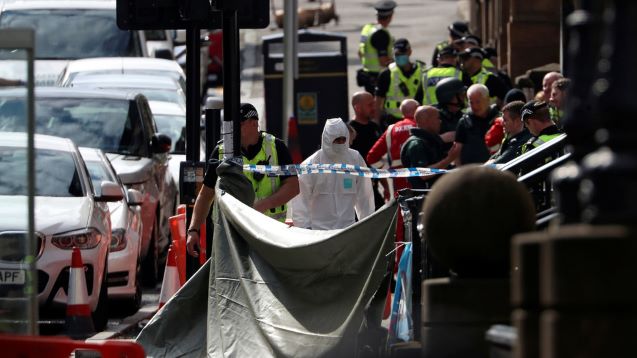 Multiple media reports say the man who went on a stabbing rampage in Glasgow and who injured six before being shot dead by police, was a Sudanese refugee who had mental health issues and was put over the edge by hostel conditions.

The knifeman, identified by the Daily Mail as a Sudanese national named Badradeen, repeatedly complained about his living conditions in the Scottish city’s Park Inn hotel, which had been turned into a shelter for asylum seekers, several British media outlets report.

His “erratic” behavior allegedly prompted fellow hotel residents to report the man to a British liaison officer. The attacker, who’d arrived in the UK about six months ago, complained about food in the shelter and appeared to take particular issue with noise, threatening to attack fellow refugees.

“He said that he was going to attack two guys in the room next to his because they’re were making noise to deliberately annoy him,” an asylum seeker, identified only as Siraj, told the Daily Mail.

Siraj claimed that the Sudanese had also told him he was “fed up” and “very angry,” and complained that there was “no daylight in his room.”

Several of Badradeen’s acquaintances interviewed by the tabloid believed that he was gradually becoming insane and some had alerted the shelter staff – allegedly to no avail.

“I think he was getting more mentally ill over the three months… He had gastric problems and had to isolate for around 20 days and his room had no light from a window,” Nigerian-born Beatrice Onwuka said. She added the man had few friends and “didn’t speak much English,” and ultimately changed his mind about seeking asylum in the UK.

The sorry state Badradeen allegedly found himself in might have been due to the measures the British authorities have taken to combat the Covid-19 pandemic. Asylum seekers who had previously been living in apartments had been moved to hotels during the pandemic, Ako Zada, an activist from Kurdish Community Scotland, told the Telegraph.

The money they had formerly received to buy food had also been swapped for thrice-daily provided meals, but many had complained about getting the same food all the time. Badradeen had said he was “very hungry” while living at the hotel.

Shortly before the Friday attack, he phoned an immigration solicitor and a liaison officer, Sky news reports. The lawyer promised to pass the man’s concerns to the “safeguarding” team at the Home Office, which deals with protecting vulnerable people.

British officials haven’t yet confirmed the identity of the attacker. They also have not released the names of his victims, except for 42-year-old police constable David Whyte, who is said to be in a critical but stable condition. Those injured in the rampage are believed to be residents and staff members of the shelter.

The attacker was shot dead by police responding to the incident. The British authorities have said they were not treating the case as terrorism.__RT.com