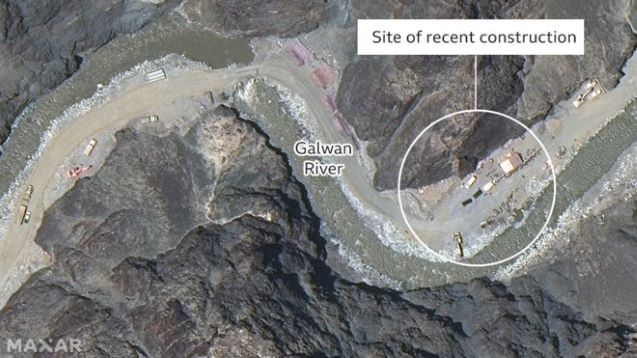 Bunkers, tents and storage units for military hardware are visible in an area where last month there were none.

Fighting between the nuclear-armed powers over their disputed frontier has prompted alarm. Chinese casualties were also reported but not confirmed.

The latest images were published as the sides hold talks to defuse tensions.

The fresh satellite images, dated 22 June, are from space technology company Maxar. The structures which appear to have been built by China overlooking the Galwan River were not visible in aerial photographs earlier in June, Reuters reported.

Neither India nor China has commented.

The clash in the Galwan Valley, in the disputed Himalayan territory of Ladakh, took place on 15 June, weeks after high-level military commanders from both nations agreed to “peacefully resolve the situation in the border areas in accordance with various bilateral agreements.”

Since the clash, and amid spiralling rhetoric, the two nations have tried to publicly calm tensions.

A statement released by the India’s foreign ministry on Wednesday said that India’s Foreign Minister Subrahmanyam Jaishankar and the Chinese Foreign Minister HE Wang Yi “reaffirmed that both sides should sincerely implement the understanding on disengagement and de-escalation that was reached by the senior commanders on 6 June”.

What do the images show?

Ajai Shukla, a leading Indian defence analyst, tweeted that “there is a large Chinese camp in the Galwan Valley, 1.5km into the Indian side of the LAC [Line of Actual Control]”.

Local media have also quoted sources in the Indian army as saying that the additional build-up by China seemed to have taken place between the 15 June clash and commander-level talks prior to that.

Satellite imagery from May shows no structures in the disputed area near where the clashes took place.

“The [Indian] government has not released any pictures or made a statement, so it’s hard to assess. But the images released by private firms show that the Chinese have built infrastructure and have not retreated,” he said.

The situation in the region is described as still “very tense”.

Meanwhile, India’s Army Chief Gen MM Naravane is scheduled to visit a forward location along the border on Thursday. He visited other forward areas on Wednesday and reviewed operational preparedness, the army said.__BBC