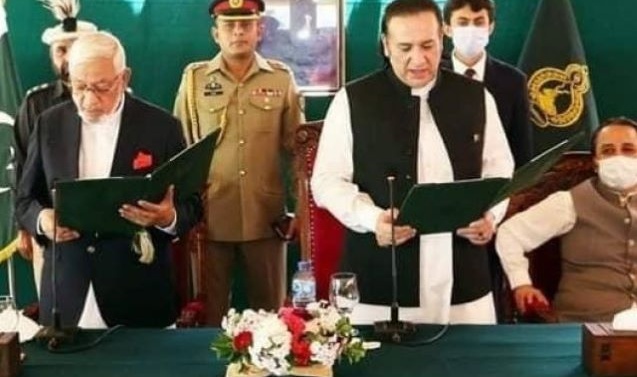 GILGIT: The caretaker chief minister of Gilgit-Baltistan (G-B), Mir Afzal, was sworn into office on Wednesday, a day after the regional government of Pakistan Muslim League-Nawaz (PML-N) completed its term of five years.

The oath was administered by G-B Governor Raja Jalal in a ceremony attended by outgoing chief minister Hafeezur Rehman and his cabinet.

Afzal became the second caretaker chief minister of G-B where the slot of CM and governor was first introduced in 2009 under Governance Order 2009.

Afzal, a retired DIG police, was one of the three candidates interviewed by federal minister for G-B and Kashmir affairs Ali Amin Gandapur in Islamabad. His notification was issued on Tuesday by the G-B council secretariat under Article 48-A (2) of Government of Gilgit-Baltistan Order, 2018.

According to the notification, the caretaker chief minister was appointed after consultation with the incumbent G-B CM and leader of Opposition in the outgoing G-B Legislative Assembly.

This, however, evoked sharp reaction from the opposition leader, Shafi Khan, who denied that he was consulted at all. In a late-night video message, the outgoing opposition leader said he was ‘condemning and rejecting’ the notification because it bypassed the law. He also threatened to launch a protest against the injustice.__Tribune.com