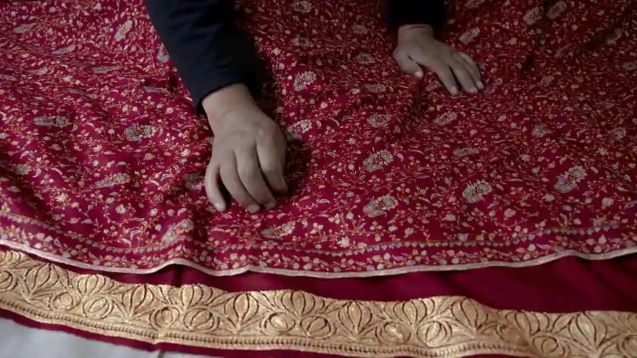 Antagonisms between Indian and Chinese troops high in the Himalayas are taking a dire toll on traditional goat herds that supply the world’s finest, most expensive cashmere. This week, a deadly brawl between Indian and Chinese soldiers caused the deaths of at least 20 Indian soldiers in the Galwan Valley, an achingly beautiful landscape that is part of a border region that has been disputed for decades because of its strategic importance as the world’s highest landing ground. The months-long military standoff between the Asian giants is hurting local communities due to the loss of tens of thousands of Himalayan goat kids died because they couldn’t reach traditional winter grazing lands, officials and residents said.

Nomads have roamed these lands atop the roof of the world, around the undemarcated borders with China and Tibet, for centuries, herding the famed and hardy goats that produce the ultrasoft wool known as Pashmina, the finest of cashmeres.

Cashmere takes its name from the disputed Kashmir valley, where artisans weave the wool into fine yarn and exquisite shawls that cost up to $1,000 apiece in world fashion capitals in a major handicraft export industry that employs thousands.

This latest bout of friction between the rival nuclear powers is adding to pressures from climate change and longer-term losses of grazing land for the Changpa, the nomadic herders who rear the Pashmina goats.

With access to the usual breeding and birthing grounds blocked by militaries on either side, newborn goats are perishing in the extreme cold of higher elevations, herders say.

“Denial of pastureland has led to high mortality of goat babies. It’s so scary, it has never been like this,” said Sonam Tsering, the general secretary of All Changtang Pashmina Growers Cooperative Marketing Society.

He said thousands of newborns died this year because most of the 300,000-strong herd of goats, which yields around 45 tons of fine feather-like wool each year, remained trapped in the extreme cold.

Authorities in Leh, the capital of Indian-controlled Ladakh, would not give any information, saying they were still collecting data.

But two officials with Ladakh’s animal husbandry department said that according to field staff, the deaths were much higher than the usual 5 to 10% mortality rate among some 60,000 to 80,000 kids each year. They spoke on condition of anonymity because they said the Ladakh administration has barred them from speaking to reporters.

Demand for the cashmere, which is painstakingly combed from the goats, sorted, cleaned and hand woven, has always outstripped supply, so shortages are a certainty, said several people working in the trade.

“It’s going to be catastrophic for wool production,” said Namgyal Durbuk, a village official in the region.

India and China fought a border war in 1962 that also spilled into Ladakh. The two countries have been trying to settle their border dispute since the early 1990s without success, as their soldiers face off along a thousands-of-miles-long, undemarcated frontier that stretches from Ladakh in the north to the Indian state of Sikkim in the northeast.

For most of the year the Changpa raise their herds in the vast cold desert of the Changtang plateau of Ladakh, which straddles Tibet at over 5,000 meters (16,404 feet) above sea level.

The harsh, windy climate is what causes the goats to grow their super-soft wool. But the region becomes inhospitable from December to February, when temperatures can fall to minus 50 Celsius (-58 Fahrenheit).

That’s when the Changpas bring their livestock to slightly lower elevations and warmer grazing lands in the Demchok, Hanle, Korzok, Chumar and Chushul areas near the disputed border with China.

The two sides blame each other for Monday night’s clash, their deadliest conflict in 45 years.

Tensions have surged since August, when India unilaterally declared the region a federal territory while separating it from disputed Kashmir. China is among a handful of countries that strongly condemned the move, raising it at international forums including the U.N. Security Council.

Indian officials have kept a near-total silence on issues related to the confrontation with China. However, a security official in Ladakh, speaking on condition of anonymity in keeping with government regulations, said the grazing lands are close to the contested frontier and the restrictions in place in the area are to protect herders from Chinese soldiers.

Around 1,200 Changpa families have lost access to grazing lands even in the areas that are controlled by the Indian military due to the confrontation, Tsering said.

But the Chinese side also is interfering, he and other herders said.

“Our nomads in recent years have increasingly faced difficulty in accessing pastures in these places. Chinese soldiers have blocked them while bringing herders from Tibet into our lands,” said Tsering.

Phuntsog, a local farmer who uses only one name, said local elders have been complaining to the Indian government about Chinese incursions for years.

“They would ignore every time. Now see where the Chinese are. Worst, these hapless, beautiful creatures which sustain our livelihood are becoming victim of this political and military game,” he said.

Tsering said herders began losing terrain years ago, when Chinese began “snatching our pasturelands in a concerted way over the years, like inch by inch.” He cited an example of a vast winter pastureland known as Kakjung, close to the Indus river.

“For the past four years it’s a no-go-zone for us. They (Chinese) have taken full control of it,” he said.__Hindustan Times