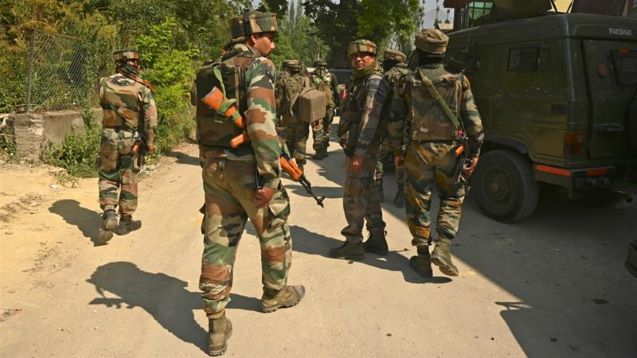 Indian forces have killed eight fighters in Indian-administered Kashmir, including two who hid in a mosque, officials said, as New Delhi escalates operations against rebels in the disputed territory during a coronavirus lockdown.

Police and army teams launched joint operations in the Shopian and Pampore areas of the federal territory on Thursday after they received intelligence about the presence of the rebels.

Five were killed in Shopian and three in Pampore in the 24 hours until Friday morning, Indian army spokesman Colonel Rajesh Kalia said, adding that the operations were continuing.

On Friday morning, security forces in Pampore used “tear-smoke shells” to force two fighters out of a mosque, where they had taken refuge, senior police officer Vijay Kumar said on Twitter, adding that the two were killed by forces while maintaining the sanctity of the religious place.

There were no immediate independent accounts of the incident.

The new fatalities following gun battles on Thursday and Friday took the death toll of Kashmir rebels to more than 100 this year, officials said.

Indian security forces have killed more than two dozen fighters, including six top commanders, in the past two weeks as they battle a decades-old separatist uprising in Indian-administered Kashmir that has cost tens of thousands of mainly civilian lives since the 1980s.

But anger in the Muslim-majority region intensified last year after New Delhi scrapped the partial autonomy of the former Jammu and Kashmir state, dividing it into two federally-controlled territories.

The Himalayan region of Kashmir was divided between India and Pakistan since the two nations became independent and split in 1947.

Both claim the region in its entirety, which has been the cause of two full-scale wars between the nuclear-armed South Asian neighbours.