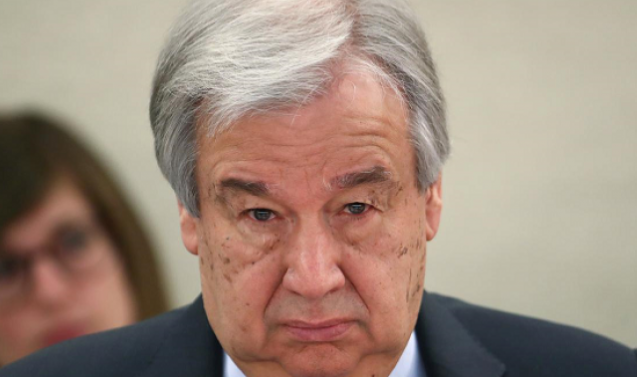 UN Secretary-General Antonio Guterres has voiced deep concern over the continued use of pellet guns against children by the Indian security forces in occupied Kashmir, and called on New Delhi to “immediately end” such practices.

The call was made by Guterres in the annual report on Children and Armed Conflict, which was launched on Monday by his Special Representative on the subject, Virginia Gamba.

The UN chief also urged India to stop torture and illegal detention of minors in the occupied valley.

“I am concerned by the detention of children, including their arrest during night raids, internment at army camps, torture in detention and detention without charge or due process, and urge the (Indian) Government to immediately end this practice,” the secretary-general said.

With respect to atrocities committed against children in Kashmir, the report said that “the United Nations verified the killing (8) and maiming (7) of 15 children (13 boys, 2 girls), between the ages of 1 and 17, by or during joint operations of the Central Reserve Police Force, the Indian Army (Rashtriya Rifles) and the Special Operations Group of the Jammu and Kashmir Police”.

“Most of the casualties that occurred in Jammu and Kashmir were mainly caused by torture in detention, shootings, including from pellet guns.”

The report particularly cites 68 instances where children between the ages of 9 and 17 have been detained by Indian security services in Jammu and Kashmir on national security-related charges, for alleged association with armed groups.

“I remain concerned by child casualties in Jammu and Kashmir and call upon the Government to take preventive measures to protect children, including by ending the use of pellets against children,” the secretary-general said.

The diplomats noted that the secretary-general’s report has dented India’s false narrative of normalcy in Jammu and Kashmir, and expose its grave violations of international humanitarian law, war crimes, and human rights violations in the disputed region.

On the other hand, the UN chief welcomed and acknowledged in the same report the Pakistani government’s efforts to protect the polio workers.

The report also notes with appreciation the overall decrease in the number of attacks against children in the country.__Tribune.com