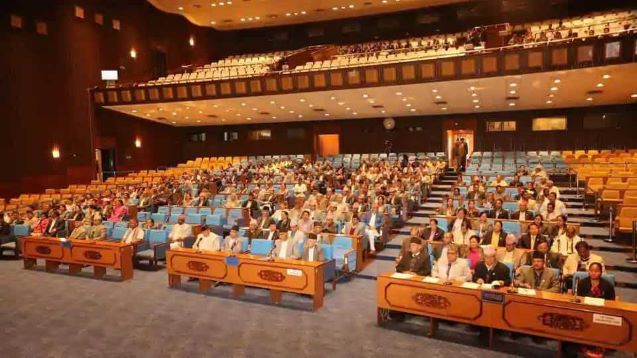 Nepal’s lower house on Saturday cleared a constitutional amendment bill to reflect its new map in the national emblem, a move that is seen to virtually make the boundary row a permanent irritant in relations between Kathmandu and New Delhi. The bill was supported by all the 258 lawmakers present and voting.

The passage of the bill, which consolidates Prime Minister KP Sharma Oli’s standing within and without the ruling Communist Party of Nepal, came on a day hundreds of protesters hit the streets of capital Kathmandu over his government’s handling of the Covid-19 pandemic.

India’s response to Saturday’s development was curt and pointedly shut the door on any possibility of talks.

“We have noted that the House of Representatives of Nepal has passed a constitution amendment bill for changing the map of Nepal to include parts of Indian territory. We have already made our position clear on this matter,” external affairs ministry spokesperson Anurag Srivastava said.

“This artificial enlargement of claims is not based on historical fact or evidence and is not tenable. It is also violative of our current understanding to hold talks on outstanding boundary issues,” he said.

At the four-hour-long discussion in the House of Representatives that preceded the vote, PM Oli was asked by several lawmakers to take the next steps to reclaim control of Lipulekh, Kalapani and Limpiyadhura from India. Some others from the Communist Party of Nepal (Maoist) favoured continuing with some of the border restrictions on movement of people that have been introduced due to Covid-19 to continue, according to local media portal eKantipur.

To be sure, the Oli government, which had gone ahead to issue the new map last month, has repeatedly claimed that Nepal would “get back the land occupied by India” through dialogue. Nepal has already asked India to convene a foreign secretary-level meeting to discuss the boundary row.

Officials told Hindustan Times that Nepal had precluded the option of dialogue to resolve differences over Lipulekh since it had already gone ahead to formalise the new map.

India will, however, continue to focus on strengthening people-to-people contact.

Army chief General MM Naravane had also hinted at this approach earlier on Saturday when he sidestepped a question on the row over the map, preferring to focus on relations between the people of the two countries.

“We have a very strong relationship with Nepal. We have geographical, cultural, historical, religious linkages. We have very strong people-to-people connect. Our relation with them has always been strong and will remain strong in the future,” General Naravane said.

Gen Naranave was the first top Indian official to go public with his assessment that Nepal’s loud protests over the 80-km road to Lipulekh pass built for Kailash Mansarovar pilgrims were probably at the behest of “someone else”. That veiled reference to China’s influence over the Oli government had riled PM Oli, particularly given that he had been trying to build a narrative that he was a strong prime minister who was standing up to its giant neighbour India.

Officials said the army general had echoed the assessment in New Delhi that found the timing of Kathmandu’s shrill protests over a road close to Nepal’s northwestern tri-junction with India and China particularly suspect.

Around the time that General Naravane made the statement, China had mobilised troops along the Line of Actual Control to set off a standoff with Indian soldiers at four locations in eastern Ladakh.__Hindustan Times